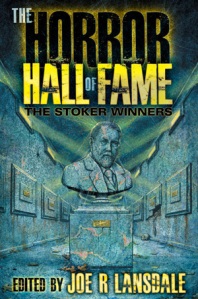 It’s been a long time coming for Cemetery Dance Publication’s The Horror Hall of Fame: The Stoker Winners. The earliest story is dated 1996, but timing isn’t so much an issue when you have a collection of truly timeless fiction. These stories, handpicked by the Horror Writers Association for the Bram Stoker Award for short and long fiction, represent a wide spectrum in horror writing.  Editor Joe R. Lansdale, a master of horror himself and a contributor to this collection, describes the anthology best in his introduction stating “These stories cut a wide swathe through the field.” He goes on to say that these stories are “gathered together like fine chocolates,” ones that “do not diminish with consumption.” The Horror Hall of Fame represents a remarkably diverse range of horror fiction and stands as a testament to a horror writer’s ability to tap into more than just the emotion of fear.

What better way to prep your palate than with a tale by a writer best known for penning Psycho? Robert Bloch opens with “The Scent of Vinegar,” a grotesque vampire story that leads one man to discover urban legend is sometimes borne of something real. There is nothing conventional about the stories chosen for this anthology, so although Bloch uses a classic monster you can expect a fresh perspective.

In an interesting turn, Bloch’s “The Scent of Vinegar” is followed by David B. Silva’s “The Calling,” a striking juxtaposition to illustrate different styles of horror. Silva’s story abandons any supernatural elements to delve into one of the most terrifying real-life monsters, cancer. He exploits the psychological power of sound to evoke a gnawing suspense and terror. Using this one minor detail, an incessant whistling from a man’s suffering mother, Silva exposes the residual horror of disease and death.

Following those two notably different tales is an equally distinct short by the infamous Harlan Ellison in “Chatting with Anubis.” Ellison, a writer whose shelves must overflow with awards, is unsurprisingly the one to whet our appetite for fantasy. “Chatting with Anubis” is an otherworldly piece that pits man against God, albeit a jackal-headed one, when two people seek great discovery in the mythical Shrine of Ammon. Ellison is an author with an impressive resume perfectly at home with the horror elite, but considering the collection overall, this had the least impact for me.

While “Chatting with Anubis” didn’t stick for me, it is followed by one of my favorites in the collection, the disturbing, nauseating “The Pear-Shaped Man” by horror / sci-fi / fantasy master George R.R. Martin. He takes one of the most nonthreatening objects, cheese curls, and turns it into a real terror. Yes, you read that right. Martin makes those delicious little, orange puffs of corn your worst nightmare. Only a true Horror Hall of Famer could do that! Martin builds pitch-perfect suspense to a shocking and satisfying reveal.

Joe R. Lansdale keeps the momentum going with another one of my top picks, “The Night They Missed the Horror Show.” Boredom leads two men into a dangerous situation where one despicable act is trumped by another in what I consider the most brutal, gut-wrenching contribution in the bunch. They miss a horror show, but find out real-life horror can be much worse than any movie could depict.

The Horror Hall of Fame continues to position stories with significantly different styles by placing Nancy Holder’s “Lady Madonna” next in line. Holder boasts four Bram Stoker Awards solidifying her as a veteran Horror Hall of Famer. In this tale, one woman struggles to give birth in secret suppressing screams of agony to protect her child. But this is no ordinary birth or baby. Our first-person narrator shares the bizarre story of her obsession to bear a child, one for which she goes to extraordinary lengths.

When one talks horror fiction, Jack Ketchum’s name is sure to come up. Ketchum, also a four-time Bram Stoker Award-winner, has perplexed readers for years with his MacGuffin in “The Box” as readers wonder “What’s in the box!?” This tale concerns itself with a man whose son mysteriously stops eating after looking into the box of a stranger. When this condition is passed on to the other children and eventually the mother, we are subjected to the aching sadness a father who grapples with a helplessness to save them.

We cool off with a dark atmospheric piece by one of my favorite horror authors, Thomas Ligotti’s “The Red Tower.” The narrator shares the story of the titular Red Tower, an obscure factory that produces a “terrible and perplexing line of novelty items.” Ligotti is able to horrify with just a building and a clever history of macabre production. He builds his Red Tower effortlessly in the reader’s mind despite his often unconventional prose in which he indulges in lengthy descriptions.

Contrary to the serious and dark tone of “The Red Tower,” Alan Rodgers follows with a playful science-fiction story about a boy who comes back from the dead, appropriately titled “The Boy Who Came Back from the Dead.” When aliens dig up Walt, he immediately goes back home. His family isn’t terribly disturbed by his return initially, and he even goes back to school for a bit, but that doesn’t last long. Rodgers’ offers a bit of reprieve from the darker tales in the collection with his charming undead protagonist, b-movie influence, and tongue-in-cheek attitude.

Another sci-fi entry, Jack Cady’s road story “The Night We Buried Road Dog” is an example of horror being heart-warming. The story is multi-layered revealing the big picture in bits as we progress. I found this to be one of the more surprising stories in terms of development. Simply put, it’s about a friendship between two gear heads who become preoccupied with a legend of the road, but simple becomes complex as the origins of the legend are revealed. The friendship between Cady’s two central characters is palpable which makes the conclusion of the story emotionally stirring.

The arrangement continues to be eclectic with the fitting placement of another erotic horror piece. P.D. Cacek introduces readers to a hypersexual woman in the strange and arousing “Metalica.” She stimulates her readers with a normally sterile encounter, the Pap smear. “Metalica” casts the reader as a metal-craving nymphomaniac by alternating between second-person and third-person narration. One moment finds Kate lying back for this routine procedure, another “you feel him growing warmer, incandescent as the orgasm builds.” Cacek successfully turns a big turn-off, visiting your Gynecologist, into a turn-on which coincidentally makes you feel a bit weird for being aroused by it.

Sadly, the anthology must come to an end and the last chocolate in the box is David Morrell’s “Orange Is for Anguish, Blue Is for Insanity.” In this story, the work of legendary Impressionist Van Dorn, ignites an obsession that threatens to destroy anyone who tries to understand its secret. For those who do, their downward spiral into insanity leads to a gruesome end.

The Horror Hall of Fame is an anthology of great stories by some of the most talented authors in the genre. It’s a must-have for horror fiction fans. Every story has the prestigious stamp of approval by the Horror Writers Association featuring authors every fan should be familiar with. It’s also the perfect collection for a reader who is curious about horror, but doesn’t know where to start. And as Lansdale suggested in his introduction, it’s “a wonderful primer for would be horror writers… because good stories and good writing do not belong to genre; they belong to readers.”

The Horror Hall of Fame: The Stoker Winners is available just in time for Christmas from Cemetery Dance Publications. The book features cover art by Alan M. Clark and darkly delicious interior art by Glenn Chadbourne for each story.