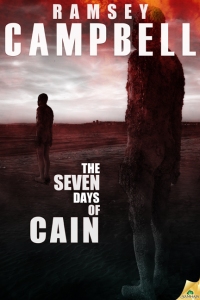 Ramsey Campbell’s The Seven Days of Cain is filed under horror on Samhain Publishing’s website and why not? Campbell is a master of literary horror and an author that boasts that title proudly. Still, I initially felt this title would be more at home with “mystery & thriller.” Considering all the basic plot points this is a classic whodunit, but it’s Campbell’s offbeat execution and unique perspective on an old sub-genre that make it hard to truly categorize. This is a dilemma Samhain undoubtedly understands since they have included this title among an eclectic selection to represent the new face of horror publishing. While their inaugural lineup features variety there is one commonality, excellence in fearful storytelling.

Is anyone really innocent?

On two continents, weeks apart, two people are brutally murdered: a Barcelona street performer and a New York playwright are each gruesomely tortured to death. In Britain, photographer Andy Bentley begins receiving mysterious emails. The messages refer to the killings and contain hints that the murderer has a personal connection to Andy. But what is it? Are the emails coming from the killer himself? And what, if anything, does Andy’s past have to do with the deaths? As the answers begin to take shape Andy will be forced to confront not only the consequences of his actions, but also the uncertainly of reality itself. Before that happens, how much that he loves will be destroyed?

Andy Bentley and his wife Claire, the focus of the novel, spend much of their time commuting in and around Liverpool. Campbell goes to great lengths to bring the city landscape to life for his readers. As you get used to their routine via local landmarks, you become as much a part of the story as Andy and Claire themselves. Campbell exhibits a hyper-awareness of all surroundings, people and animals, in his writing that only seems to exist in dreams, where you often find yourself focused on obscure objects that hold less meaning in the waking world. This assimilation into the couple’s world intensifies the suspense when their pattern is disrupted because it is even more apparent when life spirals out of control. There are a few instances when Campbell spent too much time taking in the scenery for my taste as I became anxious for the action to continue, but his smooth, poetic prose makes these lapses in pace forgivable.

The reader is also treated to the protagonists’ internal dialogue and you get an almost equal dose from each. Andy and Claire are somewhat sad characters as they struggle with the inability, but desperate need, to have children. There are many dimensions to them individually, but this gnawing need to procreate leads to deeper insecurities that threaten their marriage. As the story develops, this delicate relationship faces many challenges. Claire’s vulnerability is one cause, but also Andy’s growing fixation on a new client and the secret he is determined to keep from his wife. You know by the way they handle their issues, and through private thoughts, that they share a deep love and respect for one another so you hope for their happy ending.

For reasons unknown to the reader until well into the novel, Andy becomes obsessed with some strange e-mails he’s receiving. Coming from generic addresses that change with each new message these correspondences are cryptic ramblings that feature schizophrenic wordplay. The Seven Days of Cain plays into the gnawing feeling that the internet contains some greater evil and that its convenience can prove fatal. This isn’t immediately apparent, but a device that becomes more significant as the story progresses.

Campbell uses a classic trope to drive the second half – that man should not play God because it will yield disastrous results. Much like Mary Shelley’s exploitation of modern medicine in Frankenstein, Campbell takes our most ubiquitous technological advancement, the internet, to drive that point home. But “playing God” is arguably more deliberate in the case of Doctor Frankenstein, so the seemingly innocuous acts in The Seven Days… that domino into disaster make it all the more frightening. It raises the question of whether people can really understand the implication of what they do on the internet. And that the sense of security we get from being anonymous is actually false because all our actions have a consequence. This isn’t a modern day Frankenstein, but it is thought-provoking by similar means.

Even though there were slow points for this reader, this is a murder mystery that will hold you in its grips. And unlike some other mysteries you may have read, you won’t be able to solve this before Campbell finally lets you in on the secret. This is a book to satisfy the taste for subtle and atmospheric.