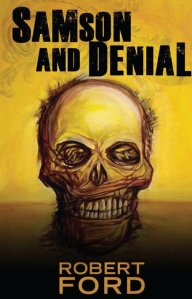 I had an idea as to who Bob Ford was, but had never read his writing before now. And holy HELL was I unprepared. Samson and Denial swings its literary bat like a pro, pulverizing your expectations like a sledgehammer to a watermelon, all while maintaining a lyrical stride that just screams of confidence and swagger. This one is a real treat, folks.

Samson Gallows is an average guy. He loves his wife, loses more than he wins, and lives his days in the grey zone between right and wrong.

After a junkie walks into his pawn shop with a mummified head, Samson is thrown into a downward spiral through the streets of Philidelphia, getting more blood on his hands wherever he goes.

In 24 hours, Samson learns how deep betrayal can run, how strong the bonds of love are, and that winning can sometimes require sacrificing everything – including himself.

For a debut piece of writing (outside of short stories and the such), this is a massively impressive effort. The words flow seamlessly, creating an almost musical tone to them. It’s a heavy, more metal blend of musical feeling, but one can rest assured that there’s a bit of bluegrass twang in there as well. The mixture is perfect. And yes, I’m still talking about a book. This story really does read like a musical composition – with movements and parts. This is an example of a book in need of a soundtrack.

Samson is a very interesting character, in that he’s pretty much an amalgamation of sins, for better or worse. The true nature of this character lies in greed and love, but also dabbles in a short of middle ground that shakes everything else up. Like the synopsis says, he’s a pretty average guy, but in a larger than life way. Where the author really succeeds is in the situations he’s placed this character in. It’s almost as if Ford was curious as to what he would do when presented with an over-the-top scenario, and plugged Samson right in there. There’s a wonderful evolution to this character, beginning with his acceptance of his hum-drum existence (on the fringe of society, mind you) and ending with his world being completely turned upside down.

Ford really does push Samson straight into the fire here, and the result is highly entertaining, very smooth, and yet still very sketchy (in an artistic manner… not in an “it’ll steal your wallet” kind of way.) The story itself felt like a tease or a promise of more things to come, touching on many really interesting ideas, but never fleshing them out to full capacity. It’s very cinematic, in a way, but also seems like it would suit a very dark graphic novel series. Hell, if I could visualize anything here, it would be something as drawn by the combined styles of Joe Wight, Gabriel Rodriguez, and/or Ben Templesmith. The whole feel is very solid, but with some intentional rough edges suiting the cityscape described within.

Ford excels at lyrical prose, as well, lending a hearty, heavy, soulful gait to it. The words blend seamlessly together, creating sentences that seem to bounce around in a very comfortable fashion. The last time I was this impressed by lyrical style this great was Steve Vernon’s Nothing To Lose. And all of those who have followed me for a while know how big of a torch I carry for Vernon’s work.

You can get your hands on  this novella when it makes it’s debut at Horrorfind Weekend, and at the Thunderstorm Books website after that. Check Ford out at his website, and on Twitter. Ford and partner – Kelli Owen – also share a forum over at The Keenedom (registration required).