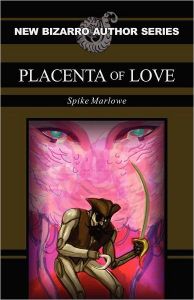 Placenta of Love is a strange kind of Disneyland theme park adventure coupled with a savage Pirates of the Caribbean storyline that also relies heavily on a whacked-out monster theme… with a love story thrown in for good measure. Well… not for good measure. This is, for all intents and purposes, a very twisted love story, albeit a very strange one. Very strange.

Marlowe doesn’t just go for wicked weird, though. She goes for emotional, dark, violent, gory… hell, she goes for everything in this wild ride through crazy town and pulls it off brilliantly.

And in the interest of fulfilling a wish that the author has regarding this book, I’d like to publicly proclaim that this novel is Amazeballs… whatever that means.

Step right up! Captain Carl the robo-pirate is one of the few Artificial Intelligences living on Venus-the amusement park planet. When Carl is given the spark of intelligence by his creator, he becomes a creator himself. No longer just an automaton from a pirate ride, Captain Carl creates the love of his life and searches for her perfect body. He thinks he’s found it in a big placenta. But programming is everything.

When the placenta’s desire to reproduce kicks in, the whole park is endangered as the organ grows to monster size, spreading placenta babies across the planet and eating all the rides (and the people riding them!). Captain Carl must band together with a cat, a creator, and the Pope of The Church of Transubstantial Birth Fear to stop his love from killing everyone and destroying the park.

Yarrrrr, indeed. Very Yarrrrr. All over the place. Yarrrrr to the extreme. And I only ‘Yarrrr’ so much because this book takes every damned car on the imagination train and flips it way the hell over, tumbling ass over tea-kettle with reckless abandon, but in a very fluid, very practiced way. Each executed plot point is wonderfully weird and hilariously off-the-wall.

In Placenta of Love, Marlowe has created an entire theme park on the planet Venus, and packed it full of interesting, intimidating, and curious rides. Of the many that she describes (each chapter is prefaced with the description of a different ride) I’ve got a few favourites that just kicked my ass. I would be first in line for a ton of these, but the following are the most hilariously intriguing, that’s for sure.

You can see where this is all going, right? Or can you…?

Marlowe may pepper loads of sexually charged content into this novel, but make no mistake that this is a story about love, and finding one’s self. Between the darkness that is very apparent in this story, and the author’s descriptions of her characters and their motives, Placenta of Love absolutely reeks of a story that is far too familiar to those of us who grew up in a sub-genre, or a group of people who were trying hard to find a place to fit in that was outside of the norm. Like Grimbol’s The Crud Masters, this novel owes a lot to The Outsiders, if only for its attitude and overall feeling of nihilism, no matter how small it is.

With her two main characters, the Romeo and the Juliet-esque Captain Carl and Helen, Marlowe bounces from wounded automaton/lonely placenta to confident and independent Pirate/giant, grotesquely ravenous placenta-monster, over the course of a story laden with heartache and pain. Captain Carl was once the leader of Venus’ pirate attraction, until his maker, in a perverted Pinocchio kind of way, gives him a fully functioning and reasoning AI, making him essentially a real being. In turn, Captain Carl steals a large, throbbing from someplace on the theme park grounds, gives it an AI like his own, and creates a monster. Where once he was in love with it (while still an AI on his ship), he soon comes to acknowledge that he must destroy the thing that he loves in order to save everyone else on the planet.

There’s so much more I want to say, but I really don’t want to spoil the treat for those of you who are interested in checking it out, which I strongly encourage. If you don’t, you’ll never find out just how Captain Carl and his monster placenta-lover actually manage to pro-create. It’s… interesting. *shudder*

Placenta of Love is covered in mystical, gothy, and wickedly dark bits of love and fun. The lengths that the author goes to in order to gross us out is brilliant, making for an epic and fast read that feels all too short.

And here’s a special treat for all of you folks who like to do a little sampling before you purchase. Here’s your chance to listen to the silken voice of Spike Marlowe as she reads the first two chapters of her book for you in a Dreadful Tales exclusive. If you’d like to stream it, see below.

Placenta of Love is available at Amazon in Paperback and for your Kindle. Visit Spike Marlowe online at her blog, and check out Eraserhead Press for more Bizarro Fiction. If you’re interested in more Bizarro than you can shake a stick at, visit the online community known as Bizarro Central. That place is awesome.