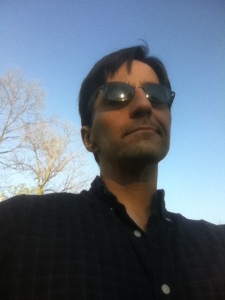 Anyone who follows me as @paperbackhorror on Twitter knows that I dig a great joke. I’m someone who loves to throw around the laughs, and I absolutely thrive on folks who have a great sense of humor.

Enter one of my favorite people in the world – Matt “MonsterMatt” Patterson.

Having written over one thousand “bad” monster jokes, it’s safe to say that Matt has a great sense of humor. He’s also one of the nicest people I’ve ever met.

In the near future, you’re going to see a lot of him.

MonsterMatt’s Bad Monster Jokes Vol. 1 will be unleashed on the world soon, but to sate your taste, I’d like to direct you to his terrifying little world. You can check him out on Twitter, Facebook, and at his very own website.

Matt is also the creative mind behind a plethora of terrifying masks, scuptures and images. In addition to his jokebook, he’s also a fantastic artist, and is releasing a comic book with Zombie Ink Comics called Wolff’s Run in 2011, including art by the supremely talented tattoo artist: Bob Bieber.

All of this news is readily available at Matt’s website. If you’re jonesin’ to get a glimpse into the mind of this wonderful man, you can check out two recent articles he wrote for Gravedigger’s Local, and KillerAphrodite.com.

Get ready for the MonsterMattMarathon. It’s a-comin’, folks.