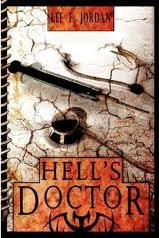 To say that Hell’s Doctor is violent would be selling it short. Honestly, if there was any more violence and brutality in this novel, I wouldn’t be surprised if it was handcuffed, bypassed the judge, and throw straight on death row. This one, folks, is a barn burning, nasty, visceral, evil little book. And that’s just the beginning. It’s also a puzzle that begs the reader to think and exercise their deductive skills at the same time as joining it’s characters on a voyage through Hell, itself.

Hell has a new Doctor. One baptized in depravity and utterly without remorse. And he knows the secrets of the portal. Forced into a desperate race through the depths of Hell itself, and pitted against some of the most vicious serial killers in history like Ted Bundy and John Wayne Gacy, the Doctor will stop at nothing to get access to the portal. “There are only three kinds of pain: Physical, such as cutting through the bone marrow of a prisoner’s leg with a dull hacksaw; Emotional, such as torturing a prisoner’s family slowly; or Psychological, which destroys the hope of the mind” – Hell’s Doctor Edict.

The in-your-face style that makes up the “Hell’s Doctor Edict” (seen above) is a prime example of the type of grotesquery one is in store for with this novel. We’re talking 354 pages of blood-soaked fiction designed to make the most hard core horror reader cringe with delight and revulsion. In fact, I’ve actually seen a few reviewers balk at the idea of suggestion that anyone read this novel for the fact that it is utterly insane and brutal. I would agree with them, but only to a point. This novel is not for everyone, but I would never go as far as not recommending it to the masses. It’s brutal, it’s nasty, and some of you are going to get a huge kick out of it. I know I did.

Now, as per the back cover, the central character of this novel is purported to be the titular Doctor. Though, after reading the novel, one will find that this is not entirely the case. The main character (read: the “central character”) is actually Mack Teacher – a private eye-type, based in the middle regions of Hell. He’s the main focus, and has the majority of the backstory detailed within the novel. He’s also the most sympathetic character of the bunch.

On the other hand, The Doctor is not in any way a redeemable character. Born of hatred and violence, The Doctor is one of those characters that I’m sure most horror authors want to write, but don’t have the staying power to go through with. He’s crass, he’s vulgar, he’s mean-spirited, and he’s ultra-violent. At the end of the story things are cleared up, and you end up finding out why. Which leads to another feature of this novel…

It’s populated with a smorgasbord of celebrity bad-guys. From Ted Bundy to Vlad Dracul to Wayne Glover, this book is covered in ’em. And down in Hell, it’s a free-for-all. The baddest of the bad can be treated to ruling any given “room” in hell as, what Jordan has named, the room Mothers hilariously shortened from Room Mother Fuckers), or be on the receiving end of a plethora of imaginative, and disgusting tortures. But those are the only evils in Hell. Along with various rooms in the underworld that serve as torture chambers on physical, emotional, and psychological levels, there also exists numerous types of monsters and machines designed to destroy, defile, and utterly maim any of the denizens of the underworld. Which leads to something else I wanted to talk about…

Anyone who knows me has a very clear idea that I’m a gore-hound. I love my blood, boobs and…well…bloody boobs. There’s something just so damned satisfying about reading 3 pages of carnage in a book, as opposed to watching something unfold for even a minute on-screen. I like to be able to look back on a particular scene and re-imagine the what the whole thing looks like, time and again. Hell’s Doctor surely satisfied that urge in spades.

Now, this isn’t your run of the mill, gross-out, biologically researched gore. This is balls-to-the-wall, outlandish, over the top, wholesale slaughter. If you can imagine it, it’s probably in this book. Jordan’s willingness to go above and beyond the normal amount of gore is shocking, to say the least. It’s incredible that the man didn’t scar himself while writing this book – it’s just that vicious. I honestly don’t think more than 3 pages go by without some sort of evisceration or bloodletting. And that’s not even counting the plethora of bodily mutilations, tortures, and other seemingly endless amounts of depravity contained within these pages. This book is not for the faint of heart.

It is, however, for die hard gore-hounds like myself.

Jordan writes with a reckless abandon, proving himself to be one of the more fearless authors in the horror genre. His style is succinct, his craft well honed, and his imagination is undoubtedly without limits.