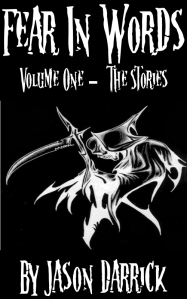 Jason Darrick comes out of nowhere with this, his first collection of short stories, and smacks the reader with his own brand of head trauma so severe that it will test the reflexes of even the most seasoned gore-hounds. As with most self published first-efforts, Darrick still has a way to go before one can truly say that he has honed his craft to the sharpness of a surgical scalpel, but sometimes a slightly duller blade makes for a better show.

Included in this book are five short stories that represent part Darrick’s first year as a writer. Each is unique in the fear that it brings, some cerebral, some visceral. (Paraphrased from Amazon.com)

– The Figure stalks Peter and Rebecca in their own home. How do you kill what can’t be seen?

– The Forest hides more than a group of tourists ever fathomed. What happens when a man’s wife goes missing?

– Hanna has been taking Vincent’s abuse in every way imaginable. She’s had enough. How will she exact her revenge?

– Mr. Vore wants to help you lose weight, but his methods aren’t found in any textbook.

Basically, as you can probably gather by the truncated synopsis available on Amazon, the stories in this volume are really quite short. The same thing cannot be said for the action and/or the violence presented herein, though. I, for one, didn’t expect this level of attention and detail from a first time, self-published piece – but that’s probably why this collection was so damned effective. I just wasn’t expecting it.

First out of the gate is Drip, a very short story that shows Darrick’s ability to throw down right out of the gate. When I say short, I literally mean half of a page, with one line at the end that will have almost any reader cringing. A great introduction to what is yet to come.

The author then delves into what one can only assume is about as close to a noir styled story as Darrick is ever going to get, but with his own brutal twist. The Figure starts off at a slow, taunting pace, eventually coming to a boil with such an “oomph” that it’s hard not to imagine the author beating the hell out of his keyboard, whilst laughing maniacally in the process.

Any reader can tell very early on that Darrick takes pleasure in physically destroying his protagonists, and not just inflicting psychological pain on them.

Next in line is The Forest. I’d venture to say that this is the darkest piece in the collection. Written under the guise of a tale about a group of tourists stranded in a remote location, this story feels more like a recounting of war atrocities than it does a simple vacation gone wrong. Darrick travels into more emotional territory with this one, choosing to hurt his characters’ hearts as well as their bodies.

Darrick ends the collection with an interesting piece that begins with a premise that feels comfortable, lulls the reader into an idea as to where it’s going, and then BANG! slaps them into place with a well aimed slice of punishment. Mr. Vore borders on bizarro horror, but still retains enough drive to satisfy those not familiar with the sub-genre. Fair warning, this one is graphic and disgusting. This is physical/body horror.

Fear In Words – The Stories, is a grand gesture of an introduction into the mind of the author. I’m pleased that this first effort worked so well, as most know that there is a steady influx of poorly edited material out there in the self-publishing spectrum. That Darrick manages to keep his stories interesting, original, and graphically visceral, without pandering to amateurish tendencies, is a welcome relief. As I’ve stated so many times already, this collection is not for those with weak stomachs. Some of the gore in this volume can barely be contained, and will surely prove to divide camps throughout the horror literature landscape.