*Sorry for the delay on this one, folks. Colum and Kendra’s coverage will be coming up in the next few days. (mostly Kendra’s, though. Colum is super lazy these days.)

For those of you living under a rock or who are… you know… not Canadian, FanExpo is the great white North’s answer to New York Comic-Con, San Diego Comic-Con, and all the rest of them.  Picture the standard cosplay, panels, and celebrities, but with an extra dash of people saying “Excuse me” while drinking a double-double.  While not the only Canadian con, it is most definitely the largest, and this was by far its biggest year yet.

FanExpo began as the Canadian National Comic Book Expo way back in 1994 by Hobby Star Marketing Inc., but has since grown to become the 4-day event that it is now.  No longer just comics and sci-fi/fantasy, you can now find sections dedicated to anime, gaming, horror, and, new this year, sports, all clustered around a ton of vendors designed to joyfully take all your money while you try to figure out why exactly you thought you needed a $500 Death Star throw rug.

Colum and I were on hand for 3 of the 4 days and, in true back-to-school spirit, I put together a guide of what I learned while standing in lines and eating $8 hot-dogs that tasted like cardboard. END_OF_DOCUMENT_TOKEN_TO_BE_REPLACED

Holy shit, Fan Expo/Festival of Fear 2012 is in the books, and in a year centered around disappointment, the DT crew had a damn good time. I did, at least. I should explain my statement about disappointment: many things went wrong and many guests did not show up. If you’re an autograph hound, you still had your chances, but you definitely didn’t get the full meal. 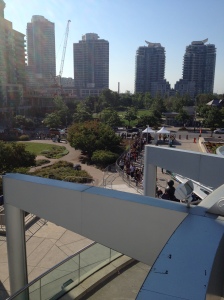 I’m not into celebrities, so I can only describe through observation what occurred on “Celebrity Row”. John Carpenter appeared to be in great spirits throughout, and his fans always seemed to walk away satisfied. The same can be said of Jon Berenthal, Norman Reedus and Sean Patrick Flannery. Stan Lee‘s lineup was brutal and snaked through the horror section at times. I have no idea how other celebrities faired, except for Tony Todd, who had the biggest smile as he met up with the actors from Night Of The Living Dead. 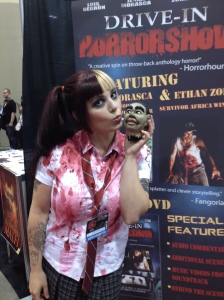 If you’re still here, we’ll get to the horror literary festivities. The layout was improved over years passed, though vampire fic fans had to stand under an escalator in order to chat with either Karen Dales or Nancy Kilpatrick. Karen told me that she had fun and had sold very well. Nancy was less optimistic, because they put her at the farthest booth possible. 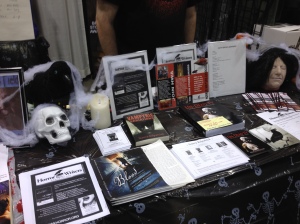 Speaking of Karen Dales, she was on a panel Thursday evening geared toward novice and inexperienced authors called Indie Genre Fiction. Moderated by Rue Morgue Managing Editor/Burning Effigy Press Founder Monica S. Kuebler, the dais included Sass Cadeaux, Stephen B. Pearl and Alan Draven, this discussion focused on topics near and dear to me. Full coverage with video shall be forthcoming. 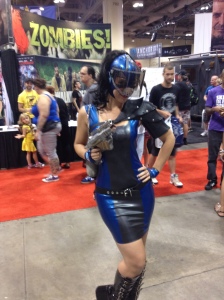 Day two began with Greg Lamberson presenting his film Slime City Massacre…which I missed due to transit issues. I took the opportunity to wander the floor in search of something to write about here. I found Don D’Auria, a name who many of you should already be familiar with. Don made the trek northward to meet fans and give away books. That’s right, Samhain Horror did hourly giveaways of book prizes, and DT’s own Kendra won Ronald Malfi’s The Narrows. I managed to nab Don for a quick chat and faux pitch-session (as yet, I’ve nothing to pitch, but he graciously suggested that I send my MS to him when it is complete). I focused on very basic topics which are covered below in:

After stumbling over my words 3 times with arguably the most prominent editor in the genre, I can safely say that if I ever do submit to Samhain, I’ll be extra careful to dot my t’s and cross my i’s. I actually said that as I was walking away from the booth, I hope nobody heard me. 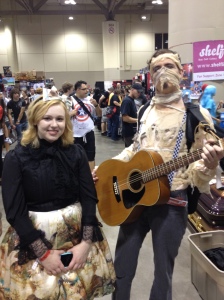 If I may derail this post right here, I have to commend HobbyStar for actually getting decent food into the building. I went for lunch soon after leaving Samhain and I have to say that I was pleasantly surprised: the pizza was fresh and the sushi was real. No, I did not eat them at the same time.

Back to surreality, I was called upon to record audio for the Gore, Girls, And God-Forsaken Cinema panel which had absolutely nothing to do with literature, but more to do with having a damn good time enjoying horror. The panelists were: Tal Zimerman, Last Chance Lance, The Gore-Met, John W. Bowen and Aaron Lupton. Unfortunately, also in the room was a malfunctioning dvd player, however our panelists weren’t deterred. Aaron took charge and asked the audience for their favourite “squeamish scene” from a movie…and hilarity ensued. You’ll have to check back with us to see what exactly I did get audio of, I’m kinda excited to find out myself. 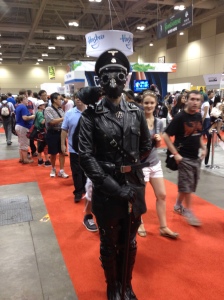 Day three was a vacation day for the DT staff, as we were unable to secure press credentials for the “big” day. As a result, I slept in and missed the What Is Goth? panel that included Voltaire, Liisa Ladouceur, Nancy Kilpatrick and was moderated by Tomb Dragomir. I believe our friends at Ottawa Horror did check out the panel, and you’d do well to check out their report.

Day four finished off the festivities in style, as Monica was back to moderating; this time with panelists Greg Lamberson, Sephera Giron and Kelley Armstrong chatting about Untraditional Beasts. Incredibly informative, but not much about beasts. Check back for the coverage and exclusive audio. 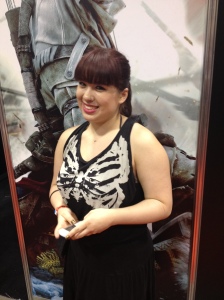 Shocked that I wanted somebody out of costume.

I took the rest of the day to wander around Artist Alley, and I’m kinda happy that I did. Not only did I find some incredibly talented paint slingers, I also ran into a young lady that won the Locke & Key collection that Colum gave out last year. It turns out that she and her associate comprise The Avod, a weekly horror podcast based on the fringe of Toronto. After pleasantries were exchanged, they were kind enough to interview yours truly for an upcoming episode. We chatted about the con, DT and my personal projects. (Ahem). I’m very thankful for the opportunity, and look forward to hearing just how out of touch I sound. 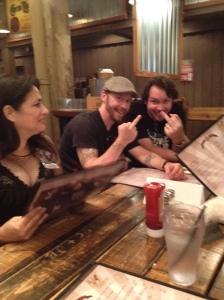 What authors do when we’re not writing.

After the good times and goodbyes, DT has to thank Rue Morgue, Fan Expo, Hobbystar and each and every one who made us feel incredibly welcome. To learn more about anyone mentioned, click their name. We will see everyone in 2013, and look for DT to have a presence at Toronto’s Word On The Street and possibly Darklit Durham.