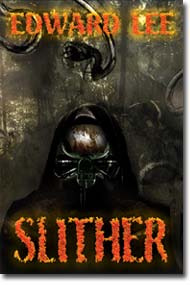 As summer comes to a close, the kids go back to school and my mornings become haunted by the cold frost of oncoming fall, I reflect on one of my most unforgettable beach reads, Edward Lee’s Slither. I know Lee fanatics who gorge themselves on this author’s work for months on end with no break. Despite being a household name in horror fiction fan circles his books just never made it into my to-read pile, until recently. When a fellow horror fiend offered up a Necro Publications hardcover edition (2006) of Slither for sale, I took a chance. The limited edition price tag was well worth the cash! Killer worms may not sound scary, but Lee takes these innocuous, slimy little trichinae and makes them truly gruesome. Trichinae is a new word I learned from reading this book. This book actually makes you smarter! Army coverups, enthusiastic scientists geeking out on polychaetes (another word I learned), oversized creatures threatening horny coeds, and more erect nipples than you can shake a bikini strap at, all populate Slither’s small island of Pritchard’s Key. Fun and terror in the sun make the best combo for summer horror flicks and, as Lee proves, equally stellar summer reads!

The trichinosis worm is one of nature’s most revolting parasites. Certain types of this tiny worm alter a host’s DNA by injecting a virus which mutates the reproductive system. This forces the host to bear the worm’s young. Typically these worms are never longer than a few millimeters. But guess what? Now there’s a subspecies that’s thirty feet long…

When Nora and her team arrive at the island, she expects a routine zoological excursion…but it doesn’t take her long to realize they’re not alone. Are her lurid sexual dreams making her paranoid…or is she being watched? The dead bodies they find are bad enough, but then her own team members begin to disappear, and when they return, they’ve…changed. Indeed, there are other people on the island…along with something else far worse.

Slither is unabashedly a good ole 80s horror romp. It reads like one of those flicks you would catch late on a Saturday night (remember Gilbert Gottfried’s “Up All Night!?”). The type that had plenty of gross-outs, jump scares, and boobies! I remember catching these slightly perverted, somewhat guilty indulgences after the midnight hour and turning the sound way down so my grandma wouldn’t know what I was watching. Once, I could hear that she was watching the same movie in the other room! The rotten apple certainly doesn’t fall far from the tree. Slither took me right back to that golden era of horror for children of the 80s when sleaze and cheese reigned supreme.

Lee is clever in his character development. While each person has the stereotypical qualities typical of a B-movie horror cast, they are still engaging and highly entertaining. Coupled with the fact that the dialogue is in your head, the story becomes more plausible than any low budget creature feature you’ll catch on late night TV. With no budget constraints holding him back either, Lee is able to take his FX to the max. You don’t have to worry about cardboard actors with terrible delivery or boom mics showing up in an important action shot. With just a little imagination, Lee’s low-budget inspired yarn becomes big budget horror with a rotten-tongue-in-cheek sensibility.

For the cast we have the archetypical busty babes with meathead frat boys in tow, cold-as-ice military personnel, a few drug addled lame brains looking to make a quick buck, and the hot, sexually repressed nerd Nora. Nora and her assistant Loren, accompanied by hotshot photog Annabelle and Army guide Trent, are at Pritchard’s Key to observe Scarlet Bristleworms. What they don’t know is these normally harmless creatures are feeding on humans. But the human vessel doesn’t die, it becomes an infested puppet controlled by freakin’ worms! Think Clint Howard in Ticks (1993). “I’M INFESTED!”

Pritchard’s Key becomes a pulsating nest of gigantic parasitic worms that seem to multiply exponentially with every minute creating some of the sickest gross-outs and gag-inducing scenes I’ve ever read. The image of a “corpse and dead worms…suspended in that liquefaction: a congealed mass of organic rot” is not one I’ll soon forget. Or the image of worms wriggling around in cum, which was spit out of an unfortunate female’s mouth! This is the kind of book you don’t want to read on a full stomach. Like swimming, it’s best to wait at least a half hour after eating before you jump back in!

Even though Slither is inspired by B-movie horror, it’s not predictable. Lee throws in a curve ball toward the end to shock his readers. You’re never going to guess what is really going on in Pritchard’s Key. You might learn some fancy new scientific lingo too, like “chitin-penetrating” or “motile ovum.” And perhaps you’ll be better than me at telling the difference between an annelid and a trichina. This will definitely be the most fun you will have learning about worms!

If you only have enough time for one more beach read before summer is officially over and the vacay time runs out, read Edward Lee’s Slither. I guarantee you will never look at worms the same way again.

Check out Edward Lee online at edwardleeonline.com and join his Facebook group.