Brice McVicar spends his days as a reporter for a daily newspaper in Ontario but his nights are consumed by the darker arts.... and his three kids and wife. He's a regular contributor to FANGORIA, a lover of horror fiction and slightly handsome. 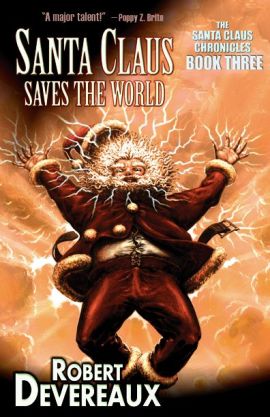 Few authors writing today – or those who have come before, for that matter – can push the strength of good taste as well as Robert Devereaux.

There’s a whole new level of fucked-upedness in his writing and nothing brings this to light better than his Santa Claus trilogy, which wraps up with the recent publication of Santa Claus Saves The World. While the book sits as the third in that series it can be read as a stand-alone though I’m going to suggest you take the time and grab Santa Steps Out and Santa Claus Conquers the Homophobes.

Ummm… yea, just looking at those titles ought to give you an idea of where you’re heading when Devereaux’s the guide. Let’s just say the North Pole’s never been this hot!

In his latest, out this month from Deadite, the articulate author brings back all the characters from the series with Santa, the Tooth Fairy and the Easter Bunny all reprising their roles. These roles, though, aren’t the loving, caring characters we grew up believing snuck in to our homes at night to deposit gifts, cash or chocolate. There’s tonnes of deposits in the book but it’s all bodily fluids…

What you need to understand before stepping out with Santa is Devereaux is more concerned with the sexual acts of these beings – who, some readers may know, are actually ripped from Greek mythology – than how they spread cheer and joy. That’s not to say there isn’t a story here but, like the previous two entries, it is buried beneath the various terms Devereaux can come up with for male and female genitalia.

This time, Santa’s made aware the scale of humanity’s future is tipping toward the negative and if he doesn’t step in the world could come to an end. With assistance from God and his No.1 son – JC himself – Santa and his elves begin reconstructing the human psyche and depositing them in to each human. It’s a slippery slope for Santa as this considerably impacts his ‘naughty’ list but under the guidance of his wives – yep, Santa’s driving the old north pole in to more than one gift bag – and his daughter, the Jolly Old Elf nails down the perfect human psyche and creates a much happier human race.
Throw into the mix, however, a Tooth Fairy who is still jilted after Santa blew her off after she blew him many a time and you’ve got the perfect set-up for sabotage.

It’s a bizarre mix of sex, seasonal bliss, bulging balls and morality but goddamn if Devereaux doesn’t make it work. He’s one of those authors who so seamlessly blends vulgarity with beautiful prose that you’re not sure if you should be gagging or gushing. It’s a pretty good mix of both, actually.

That being said, this book does not feel as shocking as Devereaux’s other pieces but that could simply be that we’ve already been exposed to his twisted visions. Santa’s sack feels like it’s getting a little empty in this entry but, compared to some other authors’ attempts to shock, Devereaux still stands high above the rest.

Merry Christmas. Hope Santa leaves you exactly what you want or, at the very least, cleans up after himself and doesn’t use up all your lotion and Kleenex.

Few authors today continue to impress me book after book. Perhaps it’s  a cynical view, but I generally start each new book expecting disappointment. i’m going to have to rethink that approach.

If you have yet to introduce yourself to Hill’s writing, you have no viable excuse. His previous outings, including Horns, Heart Shaped Box, and the short story collection 20th Century Ghosts, have rightly secured him in the company of today’s strongest horror writers. Like his contemporary peers, Hill knows horror isn’t just about monsters – it’s about life, it’s about love; and it’s about characters we, as readers, gravitate towards – flaws and all.

It’s an approach he exercises well in his newest presentation, N0S4A2 (work it out, it’ll come to you).

A proper summary of this hefty tome’s plot is difficult, admittedly. Hill introduces one of his most likable characters in the form of Vic McQueen, a spunky kid with an odd ability to travel anywhere via and old, dilapidated covered bridge and her bike. That gift – if that’s what it is – seems more like a curse, lands her in the cross-hairs of Charles Manx, a notorious child killer who collects children to take them off to the mystical Christmasland. Manx is anything but a Jolly Old Elf as he travels the countryside along with his Renfield-like henchman, Bing, dispatching parents and killing kids. And once the kids are killed, they become creepy, soulless remnants of their former selves.

However, at its heart, N0S4A2 is an examination of dysfunction, mainly that of families. We watch Vic grow from that adventure-seeking tot to a recovering drug and alcohol addict who struggles not just with the demon that Manx is, but also with the personal demons present with addiction; an estranged son who joins her in her quest; and a marriage that seemed plagued with failure from its beginning.

It’s here that Hill shines. His depiction of a mother trying to reconnect with her son while also realizing a past she thought was nothing more than a twisted dread is, in fact, reality, is not only believable, but is also fraught with a raw emotion seldom seen in today’s fiction.

Don’t assume that means Hill has skimped on the scares in return for sentimental scenes, though. This man knows how to paint mental images that are burned onto your frontal lobe and will bore through your brain like a slow burn.

I refuse to get into Hill’s lineage and gene pool, but let’s say readers in the know – which should be just about everyone these days – may find themselves forgetting just whose book they’re devouring. That’s meant as a compliment, not a cop out.

Book are made to last, not just in their physical form, but in the mental state of the reader as well. Hill either knows this, or just has the knack for presenting his readers with a universe that fully envelopes them and sticks with them long after that last page is lingered over.

N0S4A2 won’t be leaving your memory any time soon and, let’s hope, Hill certainly won’t be exiting the horror scene in the near future if he continues to travel the path he’s on. 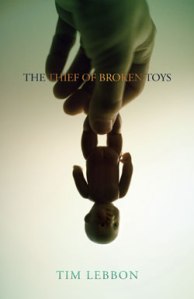 Horror isn’t always about monsters. Some of the best horror – quiet horror, if you will – deals with loss, life, and love.

No one seems to know this better than Tim Lebbon, and he’s willing to share with readers in the most effective manner in his novella, The Thief of Broken Toys (Chizine Publications). Beautifully crafted and elegantly delivering blow after blow to readers’ hearts and souls, this 2010 publication is a relentless study of the destruction death delivers to loved ones, and especially to parents. END_OF_DOCUMENT_TOKEN_TO_BE_REPLACED

There’s something wrong with Robert Devereaux.

I don’t mean that in a “Devereaux’s got a fatal illness” kind of way. I mean it as a compliment. I mean it in a sense of “Drop what you’re doing right now and buy this book. Do it. Now!” 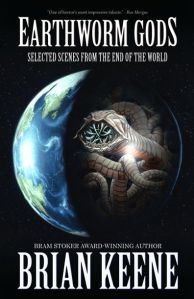 With no shame at all, I’ll admit Brian Keene has made me cry.

No, it’s not because he’s failed to respond to my countless invitations to dinner, or the way his eyes seem to see straight into my heart. Oh… wait. That’s unrelated. Best you just ignore that.

Keene first brought my rotten heart back to life when he broke onto the horror scene with The Rising. That tale of father Jim Thurmond trying to get to his son, Danny, in the midst of a zombie apocalypse is both terrifying and a tear jerker. As a young father who was going through a divorce and worried the end of his first marriage would devour his relationship with his son much like the zombies in Keene’s debut novel, the book spoke to me and introduced me to an author I grew to admire. END_OF_DOCUMENT_TOKEN_TO_BE_REPLACED