Ah Stoker season. The time of year when everybody and their mother who is involved in the horror genre biznasss gets all primped and primed to… I actually don’t know WHAT they do there. I’ve never been… *sob*

But they do offer a live stream online! WOO!

Now, just in case you were like the hundreds (or more likely handful) of people who couldn’t log on to the live stream of tonight’s HWA Bram Stoker awards, please let me rub it in your face that I was there (eventually… it’s a long story).

I win. You lose. Goodnight.

No. In all seriousness, the majority of users (all but 25, in fact) could not log into the “Stoker-cast” because of the hotel’s bandwidth limitation. The HWA offered up this explanation via Twitter:

Naturally, the explanation came after I had already tweeted this (and continued my tradition of being annoying during the Stoker Awards): 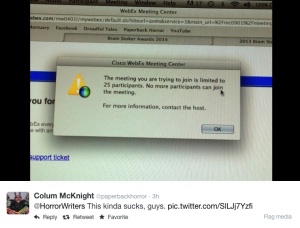 That said, when I managed to get in there – likely because some poor bastard lost their connection right when I was assailing the feed again and again – I live tweeted the ever-loving fuck out of the whole damned thing for those of you who are savvy enough to follow yours truly on The Tweeter. (@paperbackhorror).
And then my RTs went stupid crazy, and some hot chick in a yellow bikini started following me… but I’m pretty sure she doesn’t actually exist, and, well… THAT, my friends, was the highlight of my night.

Anywhooo… you can see below for the nominees and wieners… sorry… winners.
You’ll have to go to another site for wieners.

(All of the below opinions belong to me, myself, and I(rene), and in no way reflect the blah blah blah Dreadful Tales blah blah. Don’t bug the others if you don’t agree with me. They won’t listen anyway. So shush.)

Superior Achievement in a Novel

*I was kind of pulling for Pinborough and Wilson to win this one, but the battle of the Kings pretty much made that difficult, didn’t it? Regardless, I seriously urge all of you to pick up A Necessary End. It is fantastic*

Superior Achievement in a First Novel

*I had my eye on Moore’s Redheads for this one, but Mason deserves the win just as much.*

*In The Shadow of Blackbirds was my pick for this category, but McKinney spins a good yarn as well. I’d still like to encourage y’all to check this one out. It’s a great, and inventive read.*

Superior Achievement in a Graphic Novel

*Caitlin R. Kiernan kicked the shit out of this category, and I really couldn’t be happier. She deserves this win. Alabaster: Wolves was my pick for the win, with Brubaker’s Fatale coming in a very close second.*

*I’m super stoked that Gary won the award for this story. It’s incredible, and he deserves the win.*

*This category was tricky for me, but only because it was near impossible for my to get a few of the stories in my hands. I had Mannetti’s The Hunger Artist picked for this one. But then again, I’m a lifelong Mannetti fan.*

Superior Achievement in a Screenplay

*I really didn’t see TWD winning this award. If it was up against Dracula by itself, sure. But with AHS, Hannibal, and The Returned stacked against it? I was rooting for The Returned (Les Revenants) to take it home. But I guess you Americans still don’t like the French. 😉 *

Superior Achievement in an Anthology

*Don’t even ask me about this one. I’ll stand by The Horror Library forever. I’m glad Guignard won, as he seems like a nice guy, but I want to see +THL+ receive its due.*

Superior Achievement in a Fiction Collection

*”It’s about time Barron took home a Stoker Award” says every Lovecraft and modern “Weird” fiction fan ever. I agree, but still don’t dig HPL. Sorry, Brice. Barron deserves the recognition for his stellar work in the genre*

*I don’t even want to talk about this category. Have you ever tried to read essays on HPL or Ramsay Campbell, let alone Bradbury? This ain’t bathroom reading, folks! This is some seriousness! I couldn’t handle it, so I don’t have a vote. But YAY for Nolan, right?*

Superior Achievement in a Poetry Collection

*And finally, the Poetry award. See, I had my sights set on Helen Marshall for the win, not only because she’s hot, or because she’s Canadian, but because this was a really goddamned good book! I haven’t read something this awesome since Maria Alexander’s At Louche Ends. Boston’s Dark Roads is a trip worth taking as well, but I’m glad Rain, Marge, Linda, and Charlee won. They do a lot of good for Horror Poetry.*