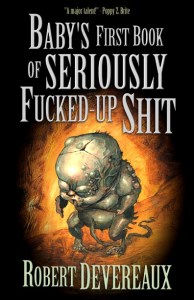 There’s something wrong with Robert Devereaux.

I don’t mean that in a “Devereaux’s got a fatal illness” kind of way. I mean it as a compliment. I mean it in a sense of “Drop what you’re doing right now and buy this book. Do it. Now!”

Those of you who read my first post here will remember my praise for Devereaux’s twisted fairy tale Santa Steps Out. Since reading that, I’ve anxiously sought out his other writings, and when this collection of short stories was offered up to me like a virgin sacrifice, I immediately scooped it up and devoured it, losing myself in its tender touches and aggressive passes – both of which you’ll find in ample supply.

In total, Devereaux serves up nine tales that, admittedly, don’t all fall into the “horror” genre, but are each horrific in a style only this author can achieve. There’s plenty of sex (Showdown at Stinking Springs); a twisted tale of a bully’s revenge and his post-life spiritual growth (Bucky Goes To Church); and a bizarre, nearly indefinable ale of beauty pageants for the unborn (Li’l Miss Ultrasound). Even zombies are tackled by the author, who is not known for delving into this particular sub-genre, in the longest yarn of the collection. Holy Fast, Holy Feast isn’t your typical zombie story, as Devereaux weaves the well-known thread through a tale that doesn’t subscribe to linear regularities and features no lack of thoroughly described sex.

Make no mistake – if you blush easily, Devereaux is going to make you squirm.

The collection opens with a geriatric recounting the day he watched the wildest (and wettest) woman, and the hardest man in the west have an old-style showdown in the middle of a dusty street. There’s no lack of bodily fluids described, and details of hard cocks, gaping pussies, and wanton lust leave each page sticky.

Here’s the thing – describing Devereaux’s work is as difficult as pigeon-holing him into a particular genre. He straddles everything from horror to romance, and to good taste, doing so with an elegant prose that lulls the reader into a twisted sense of complacency. After a few pages, you forget you’re reading something your mother would scold you for enjoying before secretly taking it to her own bathroom to enjoy.

Devereaux has never quite reached that level of recognition some of his peers have, and that’s a true injustice. He’s the gentleman of horror, in my opinion, and though, as stated, his writing is x-rated through and through, he has the intelligence and the artistic gifts to serve it up with class and elegance. That, in itself, takes talent, and Devereaux does not disappoint.

Baby, this shit may be fucked up, but give it a chance. Take a good whiff, let it fill your head and allow Devereaux to taint you.

You know you want to…