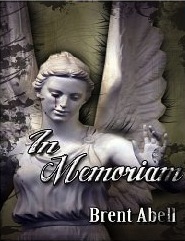 I had no idea what to expect from In Memoriam because Brent Abell and I exchanged stories on a whim. What I received is a novella full of despair, death, gore and manifestations. Does Abell’s debut novella etch itself into memory, or does it fade away like the ghosts of the past?

I enjoyed the emotional and physical torture that Andi was put through. The book begins with Andi making a very difficult decision, one that she hopes will keep her boyfriend Chris happy. Even before the supernatural elements take over, there is a very real element of human danger that threatens her.

One key success in character building is that Andi is a strong female lead, but she is not without flaws. This balance is something that I applaud Abell for, because Andi feels like a complete person. It’s easy to care about her, even if for a portion of the book, I disliked her.

Chris is a fine supporting player whose role shifts somewhat between co-protagonist and antagonist. He isn’t as fully developed as Andi as a character, but he doesn’t need to be as he spends a good deal of time in the background.

Except for very specific points, the story flows at a frenetic pace. The supernatural elements are key to the pacing, and Abell shows a deft hand at crafting verbiage that locks the reader in while increasing their heart rate.

Brent Abell is quietly amassing a list of publishing credits while he crafts his novel, which was only ever to be a novella. Abell is quite comfortable creeping people out with a smaller word count, as In Memoriam so effortlessly portrays. To pick up your copy, click here. To learn more about Brent, visit his website.

4 thoughts on “In Memoriam by Brent Abell”