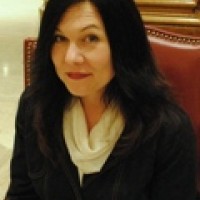 It’s the most… wonderful time… of the… oh fuck it.

Who cares anymore. Nothing is right with the world these days. Everybody’s shooting everybody else, and I SWEAR TO CHRIST that those damned little elves up in Santa-ville or wherever, ain’t gonna to bring that giant busload of free-lovin’ Swedish women to my door. Nope. Not a chance in hell.

And hey, I know I sound like a giant Christmas hater right now (and truth be told, I’m a big sap when it comes to driving around, looking at Christmas lights and listening to “Have Yourself A Sacry Little Christmas” on endless repeat), but right now, I want to introduce you to the Marvelous Maiden of Merry Mayhem.

You’ve seen the name Lydia Peever thrown around these parts a little more than a few times. And yeah, most of the boys here at DT have an endless literary hard-on for her gothic tinged horror stories, Nightface being our chief object of affection, but you have yet to creep into the brain of this wicked woman. Now, when I asked a bunch of people to help us make this a special little Christmess, Lydia was one of the first people I thought of. Why? Because she’s oft-times controversial, always willing to share her opinion, doesn’t suffer a fool, and ALWAYS brings her A-game.

So please, join me in welcoming Ms. Peever to our little Christmas hootenanny, and enjoy her blood-soaked, and thought provoking, wish list.

Scary. Hexmas. Ugh. Not a fan.

This isn’t an image thing. Nor is it indifference by osmosis being some kind of horror-geek rivethead-goth-nerdcore-freak chick. I have a mindbendingly massive list of really great and heart wrenching reasons to dislike the entire winter season, let alone the most warped religious holiday of all. I will spare you the gory details for once.

Now, I do like shiny things. A LOT. I also make amazing nut brittle. So, now that I get to make a Hexmas List of Do Want, it doesn’t seem as bad. Thank you DT!

My number one Christmas wish is to see Collected Works Bookstore find a buyer. The public has until December 24 to purchase an amazing bookstore on Ottawa’s lovely Wellington West for $1 plus outstanding debt. Check CBC and the Ottawa Citizen for the scoop. I am in there nearly every week to buy books, have a latte with event coordinator Chris Carroll or attend events. I did my last reading there during a Postscripts To Darkness event. My first book signing for Nightface was there. I attended both of Lord Morpheous’ How To Be Kinky events there. Good times. Great times. If no one steps up and buys the business, another shard of my heart will just disintegrate.

It is not a wonder Tobin Elliott and I get along well. His list echoes things I want too, especially to see No Hope on the shelves as soon as possible. Further echoes in Colum’s wish to see Bucky Dennis grace the pages of another novel, let alone see Colum published. (Ed: Working on it, Lyds.)

Dear Baby Jesus, make it so. Your Pal, Lydia.

So, the rest is really a list of Do Want for 2013. It’s the lucky year for superstitious people and horror fans in general, right?

So, I want new albums from horror-rockers Patron Saint of Plagues and the dark industrial-ebm band Encephalon, and to see both on stage at Bluesfest. Both bands sound amazing and work fucking hard at what they do.

I want Rue Morgue Radio back. No discussion. 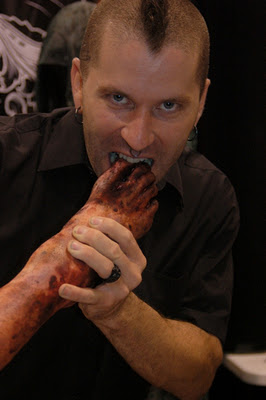 I want Remy Couture to have all charges against him dropped and the Canadian Criminal Code section for obscenity re-defined. (Ed: We’re talking about s.163 of the Canadian Criminal Code, which is literaly titled “Offences Tending to Corrupt Morals“, and encompasses such mediums as literature, art, film, audio and, specifically, publicly exhibiting a disgusting object or an indecent show. The whole section is so damned subjective and vague, it would could make anybody’s head spin. Source: Martin’s 2012 Annual Criminal Code) Horror artists can’t afford to come under the gun in this era where the most violent ‘crime comic’ is the daily news. Art imitates life. Don’t persecute the storytellers.

I want someone to give Joe Hill, Edward Lee, Jack Ketchum and Wrath James White carte-blanche and just let the men publish or create whatever they like. Then give the ‘next’ set of Hill, Lee, Ketchum and White a zillion dollars so they can too.

I want more horror that is visceral, distressing, thought provoking and straight-up disgusting that does not involve married couples, kids, or pregnant women. I have no heart-strings to tug man, it’s just chum and you know it. Stop basing everything around the hip guy with the hot girl and the kids and the zygote and the hey-hey-hey. Get bloody. Get fucked. Get mental. Stop wimping out. Hill, Lee, Ketchum and White excluded. You guys can do whatever you like because you bring it.

I want Chapters to support indie-horror and small-press the way small bookstores do. If the unfortunate circumstance of larger stores displacing the smaller ones is that we end up awash in a sea of fifty shades of twilight… they could do the favour of stocking what horror fans are looking for and taking a chance with some print-on-demand and small-press titles. Each store should be involved in their community. It’s not like they don’t have the money.

Enough about me, let’s talk about me…

I’d like to see more publishing come out of Hora Morior. Judging by the quality and content of Black Bile, I want to find more of that and start working on other various future-plans for that arm of Hora that I’ll be involved with. If Justice M. Stefaniuk makes a Black Bile II, I’d die happy or something like it.

As for my own projects, I really want the Single Tale project to shape up the way I envision it. I can’t really say too much about it except that it involves unleashing some super dark kink fiction with some of my favorite friends and authors. Dreadful Tales’ own McKnight and Darrick are on board as well as myself and dark kink author Chris Carroll. Be very afraid.

Nightface II is shaping up (thanks to Tobin for the support in his post!) and I have some grandiose delusions for that too. As it stands right now, every single short I have written in 2011/2012 is under serious consideration or sold. I can only hope I have the same success next year.

For Hexmas and forever, I’d like more time to write. The fairy-dust wears off when the spooky people face too many hours of real-world obligations and few hours to create properly.

If Sinister Claus is listening, please create a time-stopping mechanism or secret lottery for artists so we can better revel in the strange and untoward.The more terrible things we can carve out of our cracked-wide skulls and slap red and raw upon your dinner plate, the better.