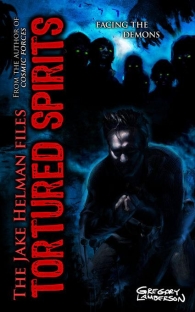 (Colum has wind in his sails today, so you’re in for a long read. You’ve been warned.)

It’s taken a long time for this review to find its legs and finally hit the (digital) streets. Regular DT readers will know the love I have for the oft-times abused Jake Helman, and pretty much expect that I’m going to give it a killer review.

Having said that, I would like to take this time to remind the regulars and new-comers alike that not every book can get a rave review, yet not every book deserves a bludgeoning. The latter can definietly be said about any entry into the Jake Helman files. So you can trust that I absolutely loved this book… but you might just be a little surprised to find that I almost hated it at the same time.

Believe me, this is a massive upset in my little bubble of a world, and I can yet again say with confidence that Lamberson is truly guilty of what I’ve said time after time – this is an author that plays with the readers’ emotions unabashedly, and then smacks them down just when they’re least expecting it.

Let’s just say that, at one point, I was about ready to run to Buffalo and grab Lamberson by the shoulders, shake him, and start screaming “WHHHHHYYYYY??? WHY FOR THE LOVE OF GOD? WHHHYYY???!?!?!?!?” (Ed. note: I couldn’t possibly take Lamberson, and I’m sure of that — so I’d easily bet that it would be something more like a fist shaking from a distance… from behind a tree… a block away…)

I won’t hesitate to say that this is one mean bastard of a book. Easily the longest in the Helman series so far, Tortured Spirits starts off with a bang (no pun intended), and goes straight into a plot full of the author’s trademark intrigue and action. Lamberson knows how to craft a story that reeks of drama, and this one is no different at all. In fact, I’d say that it’s the best example to illustrate his precise attention to detail. But I can tell you this (and it’s a total spoiler), Jake gets laid more than usual in the first 80 pages, so I should have seen a thorough ass kicking coming. It’s in the cards at that point, right?

And if the Helman formula is correct, once you’re on the other side of that first 80-100 pages, you’re into a whoopin’ likely to leave your grand-kids feeling sore.

Having said that, it’s no surprise that Lamberson doles out the brutality to his most well received character. Each installment into this series sees some part of Helman broken, bruised, sliced, chopped, shot, stabbed, slapped, or whatever and, when I spoke to the author earlier this year, he informed me that I’d be in for quite the surprise at how much he laid into the character this time around. To say I was surprised by how true Lamberson’s word were is the biggest understatement of the year. I’m not even going to play games here. I was pissed at Lamberson, but felt like an idiot at the same time because I should have come to expect it.

But now… now I’m at a loss for words, if only because I can’t figure out for the life of me whether Lamberson loves or hates Helman. Time will tell, I guess.

The sign to Jake Helman’s office door says Private Investigator, but this ex-cop’s profession is more complicated than spying on cheating spouses. Over the course of two years, Jake has battled demons, zombies, even a cosmic monster – and he has paid dearly, both physically and emotionally for his exploits.

Now on a quest to save his best friend’s soul, Jake embarks on his greatest and most terrifying odyssey yet: from the streets on New Orleans to the nightclubs of Miami to the Jungles of Pavot Island, where undead slaves harvest narcotics for a ferocious dictator.

But this time Jake isn’t alone. Maria Vasquez, a beautiful NYPD homicide detective, joins him to rescue her former partner. With no backup and limited resources, Jake and Maria battle voodoo overlords, military troops, and an army of zombies. What will prove deadlier to Jake: the addictive drug called Black Magic, the return of an old enemy, or a vengeful demon plotting against him?

Last year, when Cosmic Forces hit the shelves, I thought Lamberson had done all he could do with the series. I didn’t think the series was dead. No, no, no. But I figured the author would never top a monster so epic and insane as what he presented in Cosmic Forces. Not that there’s anything nearly as huge as the massive religious themed boogey-thing that the author dreamt up for that one, but in terms of action, well damn… I was proven – Oh. So. Very. Wrong.

It took me a while to read this installment in Helman’s life, mostly due to personal stressors, but I’m damned glad I stuck with it. In any normal circumstance, I fully believe this one could have been smoked in a single evening. But being that things sit how they sit, it took me a while. You, dear reader, will probably breeze through it like the reading wizard that you are… cheeky bastard.

Savoring the insanity that makes up Lamberson’s character and world-building skill is somewhat a treat to avid readers like myself. Here we have a seasoned author, a very intricate series, and enough storylines just built in to the whole. It’s virtually impossible not to imagine the author having a whole stockpile of baddies in his warehouse, all waiting to pop out and slaughter the reading public, one by one.

This round sees Jake facing some of his biggest demons – some you’ll instantly recognize, and some that are relatively new to this journey. I mean… shit… you just need to read this one to understand what I’m saying.

It’s epic, but not in that “I’m-a-hipster-and-I-use-the-word-‘epic’-to-describe-everything-I-can’t-find-words-for-because-my-vocabulary-isn’t-nearly-as-impressive-as-I-want-you-to-believe” kind of way. I mean it in the actual, sincere, Merriam-Webster dictionary “extending-beyond-the-usual-or-ordinary-especially-in-size-or-scope” definition kind of way.

Lamberson ups the ante with this foray into Helman’s world, making Tortured Spirits one of the farthest reaching novels, but not capturing the top spot in my books. I preferred Cosmic Forces to this one, if only for the action and adventure feelings, but not because it’s a more superior read. There’s no doubt in my mind that Lamberson is honing this character and his stories into something more refined and possibly non-horror related – something I’d love to see him try his hand at – but to a place beyond that. A place that will finally grant him the acknowledgement outside of the “genre”. The quality of this cross-genre effort is impressive, the plot is intriguing, and the pace is perfect. Again, a stellar entry into the series, and another notch in Lamberson’s literary bedpost.

Tortured Spirits is a blast. It’s equal parts crime drama and supernatural action-adventure, and I wouldn’t be surprised to see the next instalment of the Helman series blow into other genres and maybe expand on threads left dangling in some of the previous books – one of which I’m absolutely desperate to read about.

I applaud Lamberson for taking the steps he has in this series, and cannot wait to see where he goes next. Truth be told, I’m a Helmanite for life at this point.