The dreaded day of December, where all of our worst fears and greatest joys converge in a plethora of steamy, angst ridden, egg-noggy GOO is fast approaching. Being that December 1st marks the horrible 25 day countdown to the end of that season we love to hate, I thought it would be fun (*cough*filler content*cough*) for some of the newcomers to the site to get to know the folks at DT a little better.

I figured I’ll start off this Christmas themed, literary AA meeting with a good, solid foundation in all of the things I want for Christmas that I most likely have no bloody idea how to attain. And I know damn well you’re not going to buy them for me or even get this shit done, but at least this will serve as an ice-breaker if you ever happen to find yourself face-to-face with me and don’t know what to say. Right? 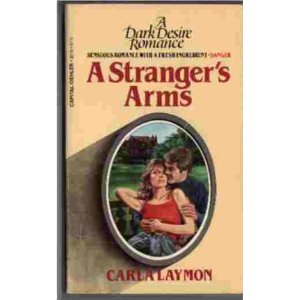 First off, y’all know I’m a HUGE Richard Laymon fan. In fact, I can boast a massive collection that would impress and anger a lot of fans out there. You’ve seen the picture here before, but what I’m missing is the holy grail of all Laymon collectors (Damn you, Brian Keene for having a copy!!!): A Stranger’s Arms by Carla Laymon.

Yeah, I know. It’s a romance novel. Whatever. I’m totally secure in my masculinity by this point, having survived (and caused) some of the worst life experiences ever, and taking up knitting at the same time. No worries here. But goddamn… a Laymon smut book? Lord KNOWS I want a piece of this action. Last I saw, this sweet little piece of perfection was going for something like £600 on the black market (the evil Amazon.com), and even more on eBay. So, suffice it to say, if one of you wants a man-servant who knows how to please the ladies… who the hell am kidding… ? Ugh. 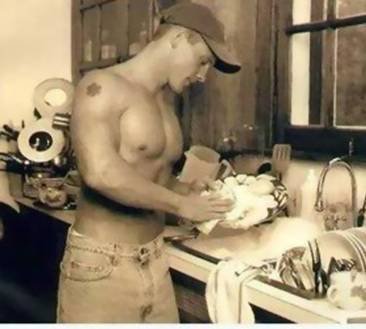 I’ll do your dishes for a year. How’s that?

Beyond all of the Laymon gear you could possibly see me squeeing like a teenaged girl for, it might, but probably won’t, surprise you to know that I’m also one of the biggest Bryan Smith fans out there. Now, this one is going to be tough for ya, as I’ve got everything the man has written and published, but here’s what I want you to do for me for Christmas:

I’m not sure about that idea… just… make it work…

I want Bryan Smith to be published by one of the Big 5, and to reap the benefits he so rightly deserves. Add Everson, Gagliani, Keene, Vernon, Ketchum and, hell… why not… ME! to that list. Heh heh… well, that is… if I ever get off my ass and write that awesome story about the festering tongue monster that takes over an adult dating service, enslaves all the women in the world to demean their husbands and boyfriends, thus sending the whole planet’s male ego plummeting to an all time low, leading to an apocalyptic scenario that is jaw-droppingly lacklustre and boring as hell! That’s what the genre needs! YEAH!

So get working on that, folks. Send these boys your agents, publishing deals, and all the good juju you can muster.

What else, what else… knitting stuff. I want some of that.

Oh, and money. I need some money. Papa’s gotta pay his legal bills somehow, right? And food. Can’t forget buying food… even though I’m getting fat…

Here’s another one! I want to see Tobin Elliott’s No Hope come out, for god’s sake! The follow-up to the author’s stellar chapbook, Vanishing Hope, released via Burning Effigy Press in August 2011, has been sitting around in my brain for a long time now. Being friends with the author doesn’t help things either. Good thing I have a first draft kicking around… oh wait! First Draft!? NOOOO!!!!! Everybody knows first drafts are the devil’s work! NOOOO!!!!!! I guess I’ll have to wait for BE to make this wish come true.

In the mean time, how’s about we ask J.R. Parks to bring back Bucky Dennis, eh? It’s been FAR too long since I’ve heard anything about The Gospel of Bucky Dennis, but I DEMAND a follow up. Bucky could well serve to stand beside such greats as Felix Renn, Jake Helman, and Sam Truman as one of my favorite noir/crime characters to get his ass handed to him by supernatural forces. If you haven’t read this little piece of literary lunacy, it’s about time you did, sho-nuff! And please, harass J.R. Parks via Twitter and set a fire under his ass. I can’t do this all by myself, folks.

And if you look up, skipping the picture of the mustachioed man, you’ll see a beautiful woman that goes by the name of Kat. To me, she’s one part of the dreamiest lady-team the world has yet to know enough out, but alas… I don’t run things, and the world sucks. Below, you’ll find two of the most smokin’ hot ladies in the literary world: 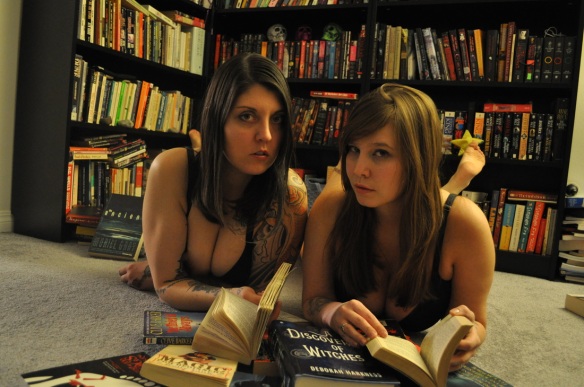 This Christmas, and for all of next year, I want more people to know about Kat, Cara, and the entity known as the Bibliobabes. Beyond their ridiculous and hilarious Daily Radness posts; the best feature in the literary landscape – Naked Reading Sunday; and their monthly book revolutions, they write some of the most incredibly insightful reviews you’ll ever read. Granted, they’re about as potty mouthed and spazzed out as I am, but what’s not to love?

Look at it this way: You can imagive them reading naked, or me. It’s your choice, really. I’ll still vote for the B-Babes any day. (psst: start NRS again, ladies. We miss your beautiful… “books”.)

I could babble on and on about this crap for hours, but since this was completely a filler post, I’ll leave you to think about the dreaded Christmas holidays and all the suffering in the infectious joy that the season brings. As for me, I’ll be curled up in bed (on my parent’s couch, to be more specific), reading and watching whatever I can get my hands on. More than likely it’s going to be a shameful christmas smut story or some obscure documentary about something I’m not remotely interested in, but that’s how I roll.

3 thoughts on “All I Want for Christmas”