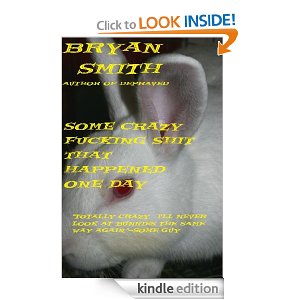 Sigh… that title… It hurts my brain. I can’t get behind it, but the story… the story is bloody good. How good? Soooo goooood. We’re looking a piece here that is fun as hell and definietly everything you’d expect from Smith’s twisted mind, but I’ll be damned if it isn’t a little out of his camp. I mean, sure we see killer ladies in all manner of undress often in his prose, but the sheer amount of fuckedupness in this story is a little overwhelming. In terms of volume, this story packs insane amounts of action and plot into something that is just too short. I’m used to the Smith that starts off with a supremely dark premise and kicks the reader’s ass all the way through, but this is like a ride through a twisted cult grade-z horror flick directed by Rob Rotten or something.

Seriously! LOOK AT THAT TITLE!! The story lives up to the title!!

Admit it… You’d have to be a “special” individual to not be curious.

This story is kind of a goof, but I think most anyone who enjoys my books should have fun with it. Featuring Satan-worshipping lesbian cheerleaders with chainsaws, Nazi zombies risen from the grave, and… fluffy bunnies.

Smith’s official website goes on to say that this particular story originally appeared as bonus content in the hardcover edition of The Freakshow from Thunderstorm Books. Being that this is the first time I’m hearing this news, you can rest assured that I’m kicking myself for not staying in the loop. Hey, don’t blame me. Facebook decides who I pay attention to. You didn’t think I actually had a choice, did you?

Whatever. Back to the story at hand…

The above description reads true to Smith’s tale. There’s plethora of satanic cheerleaders, and they’re hot as hell. But lest we forget, there’s also a doped up blonde chick, Nazis rising from the grave, and an interesting, brutally comedic moment that does in fact include fluffy bunnies. It’s like one of those scenes in a movie where you’re already laughing at something hilarious, and then something absurd happens that leaves you choking on Doritos while you rock back and forth, devolving into hysterics, knowing full well there’s a special place in hell for people like you. It’s that sort of moment. Poor damned bunnies…

While Some Crazy Fucking Shit That Happened One Day does have some crazy fucking shit happening one day, it’s missing a lot of the appeal that most of Smith’s work has for its readers. The layers and layers of personality traits present in most of this authors characters aren’t there; the extended scenes of eroticism are eschewed for more brief, less pornographic fare; and the overall feel of the story is a tease to what Smith can really accomplish when given the time and inclination to puff his feathers out.

This is an author who has almost single handedly brought splatterpunk out of the dark and given it new meaning, busting it out of that oft hated label, and throwing it back to the forefront of the genre with new life. Some say he’s the new incarnation of Richard Laymon. I say he’s Bryan Goddamn Smith – no comparison.

But yeah, I’ve got to admit that this is one fast paced, fun and dirty short story. I wouldn’t say that it’s the best primer for Smith’s actual body of work, but if ever I’m in the mood for a blistering read full of horror’s best plays, this is bound to be one of my go-to pieces.

Anyone well-read in this genre can tell you that when it comes to Satan and the heavy metal horror scene, Smith knows what he’s doing. He’s almost got the market cornered. Smith did cults in Soultaker and somewhat again in Rock and Roll Reform School Zombies; created a hybrid cult/demonic, ritualistic underground thing with House of Blood and followed that up with Queen of Blood; and rocked a cultish group that just defied every little damned thing I ever thought was capable in thie genre (thus turning me into the ultimate fanboy) with The Freakshow. So yeah… he’s been there before, but this is different. The abovementioned books are all pretty much as serious as a heart attack.

This… this story is just fun. Pure, unadulterated fun. This is a story about some crazy fucking shit that happened one day.
C.