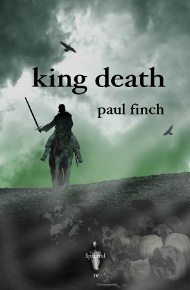 I didn’t know what to think of this one when I went into it. For one, when I receive one of Spectral’s books to review, the first thing I do is leaf through it to find out exactly how long it is. Not because I want to get it over with, but because I want to know how much time they’re going to take me away for. This is, as I’ve mentioned before, one of the most exciting presses to hit the genre in a long while. The UK style that they bring forth is refreshing, and harkens back to the good old days of hammer horror and the perfection that one could expect with the stories they told.

So when I opened this one and found a glossary… well… I was a little put off. To clarify a little, I’m trying to work my way through A Game of Thrones right now. I’m not (at all) a fan of sprawling epics that require the use of maps, strange languages, and a system of words that I’ll never remember. But the prologue to that book hooked me. Now, back to the story at hand. When I saw the glossary, I immediately thought of Eddings and company, and wondered if Spectral finally dealt me a book that I wasn’t going to like.

I couldn’t have been more wrong if I stapled the damned thing to my chest and hollered about sparkling vampires and the end of the world as we know it.

This chapbook kicked some serious ass.

In 1348, England is stricken by the Black Death. The worst pandemic in human history has reached the kingdom of the warlike Edward III, a monarch who in battle against human adversaries cannot imagine defeat.

Little wonder that fear of the supernatural reaches an all-time high. Little wonder stories ignite about witches and demons spreading the plague, about ‘King Death’, an awesome harbinger of doom from whom there is not protection.

Cynical opportunist Roderic doesn’t believe any of these. With reckless indifference, he sets out to enrich himself…

-from the back cover.

Now there’s a load for the mind, right there. What we’re looking at is basically the story of a knight, or squire, who has not succumb to the plague, and is using every bit of his knowledge to gain more and more riches for himself, no matter the cost. He runs across a young boy in the woods who believes that he, Roderic, is the fabled ‘King Death’, and leads him to his castle – a place that is completely devoid of life – under the promises of sparing his life and granting him untold riches. What Roderic finds there, though, is a knife in the back and the chance to meet the real ‘King Death’, himself.

The fact that this book basically came out of nowhere is always a plus with me, as a reader. The imagery was incredible, and every facet of the story was told in a manner that didn’t speak down to the reader, even though it was set in a time period that necessitated a glossary. It’s not difficult to figure out what everything is when put into context, and it’s made simpler by the fact that the whole of the story is very cinematic and easily imagined as a scene in one’s head rather than a story told on paper. And I say scene because this story is basically one long scene pulled out of what feels like an epic tale.

Finch has the flow and style of reminiscent of the heavyweights of our horror history that immediately called forth the stories of Campbell, Blackwood, and Hodgeson, if only for his ability to craft an intensely dramatic, yet stripped down scene. I know a lot of people may disagree with me, but this kind of stellar writing doesn’t happen often enough in UK horror to make me think of these authors. King Death really is a treat to read, and it bothers me that it’s not widely available.

Now, to speak about the press for a second, it’s important for me to mention how damned perfect these pieces are, and how much you’re going to want to get out there and get your hands on these stories. Maybe together we can convince them to release more than 100, or even release them as ebooks. Go take a look at my reviews for Nowhere Hall or Abolisher of Roses. Even What They Hear In The Dark. These are amazing stories featuring incredible artwork and produced by one of my absolute favourite small/specialty presses. With King Death, Spectral has cemented themselves in my head as a press capable of heading up a revolution in UK horror. Keep an eye on these, folks. They go fast.