At the end of May, Colum and Jason left Pat and I to our own devices so they could gallivant around the Toronto ComiCON with chicks dressed like videogame characters and a miscellany of celebrities. Jason chatted it up with the co-creator of REPO! The Genetic Opera stage production and creator/writer/illustrator of The Molting comic book series Terrence Zdunich (check that out here). He also captured a panel with the director of REPO! The Genetic Opera and Saw II Darren Lynn Bousman which you can listen to here. While I was excited for my boys to make those connections and snag some insightful audio, that wasn’t what had this fangirl turning neon green with envy; it was their brush with horror-fan-turned-beloved-genre-director of Hobo With a Shotgun, The Bearded Wonder Jason Eisener.

I first heard of Jason Eisener when he stopped by the Rue Morgue Radio studio to talk about his short film, Treevenge (2008), with Stuart FEEDBACK Andrews. It wasn’t until much later that I finally saw the short film (which is available on YouTube), but his passion for horror and exploitation film during that interview was palpable, so it was a name I didn’t forget.

Eisener, like me, was a child of the 80s who grew up on the five-for-five VHS splatter and sleaze that defined our adolescence. When I listened to that interview I remember thinking “This dude really gets me.” I always wonder why there aren’t more directors like Eisener to come out of that era motivated to change the landscape of horror film and rid fans of the tiresome remakes and Hollywood cash cows. Now, with the cult success of Hobo, horror fans everywhere are singing “One of us! One of us!” Eisener took all the nostalgia of a time dominated by late night VHS viewings and turned it into a sick, bloody, candy-coated exploitation film any grown-up horror kid can love. 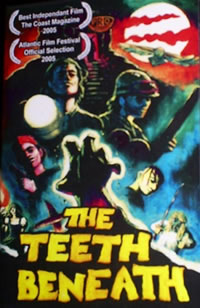 As Eisener himself recounts in the panel discussion below, it was the endless hours spent watching VHS tapes with his best friend and Hobo co-writer John Davies that inspired him to become a director. That influence is certainly apparent in Eisener’s back catalogue as much as in Hobo. He revives the punk rock low-budget horror sensibilities of genre gorefather Sam Raimi in his 45 minute short The Teeth Beneath (2006). You got skater punks breaking into a Pro Skateboards shop only to find they’ve awakened an ancient evil from the basement. The storyline is hilarious with some good gags and accompanied by great tunes. While it’s not as tight and mind-blowing for me as Treevenge or Hobo, it is still highly entertaining. You gotta crawl before you can skate-rape, right? Eisener completists can pick up a DVD copy from the skateshop featured in the short film, Pro Skateboards.

Eisener draws from his early influences in his 2008 effort, the 16 minute Treevenge, as well. He infused the short with beloved exploitation tropes including an opening from the incongruously majestic and beautiful theme of cult favorite Cannibal Holocaust. What follows is 16 minutes of pure blood-soaked exploitation bliss. Families tromp through the evergreen lots looking for the perfect Christmas tree unaware that these bristly chunks of wood are about to crack (metaphorically speaking) as they plan to rise up against mankind for deadly revenge. Eisener and crew are not frugal when it comes to buckets of blood and it flows as freely in Treevenge as it does in Hobo. He never holds back which is a quality I love most about his style. You’ll even see Eisener kill *gasp* children! Oh, the horror! 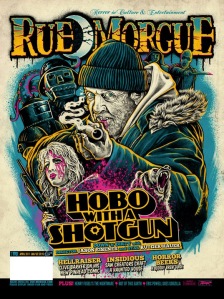 Eisener finally got his over-the-top horror kid heart into a feature length film with Hobo. First as a faux trailer that played before some Canadian screenings of the Quentin Tarantino / Robert Rodriguez double feature, Grindhouse. The result is an insane psychedelic mind trip of a rainbowspoitation film starring one of horror’s most beloved names, Rutger Hauer as the titular Hobo. To see this director grow and come into fan consciousness so quickly is truly remarkable. I’m sure the journey for Eisener himself was like a flash as well, but it’s crazy to hear the young director discussing Treevenge one year and a couple years later see his first feature film on the cover of my favorite horror mags, Rue Morgue!

I’ve probably seen Hobo at least 20 times by now. The colors are mesmerizing and the action is unrelenting and completely over-the-top. The soundtrack is a pulsating, punk rock graffiti nightmare reminiscent of Return of the Living Dead. ‘Member how badass that soundtrack was!? Blood seethes from every corner and every orifice in Hobo. It’s ridiculously sick – there’s a child molesting Santa and a school bus full of children get bombed with a flamethrower – and there are more than a few memorable one liners. A couple of my favorites are:

“Put the knife away, kid… or I’ll use it to cut welfare checks from your rotten skin!”

And of course there is Hauer’s dramatic monologue which opens the official Hobo trailer.

Tiny purple unicorns shitting rainbows dance in my heart when I watch this movie, that’s how much I love it. I know what you’re thinking. What the hell does that mean!? It just means there is something magical that happens when I watch Hobo. It restored my faith in humanity, in movies, and most of all the horror kids. Here’s to the other Eiseners out there exorcising the demons in their minds and hearts to make kickass horror / exploitation for all us fans. “One of us! One of us!”

If you were crying into your pillow while all your friends were hanging out in Toronto for the ComiCON, never worry, Dreadful Tales has you covered. Check out this very informative panel with Jason Eisener, The Bearded Wonder. Or as Stuart FEEDBACK Andrews called him, The Grizzly Adams of Exploitation Cinema. There are a couple of never-before-heard stories and interesting tidbits about Hobo that no fan would want to miss.

Keep up with Jason Eisener via his tumblr, Welcome to Fuck Town, as well. He’s always posting great pics and vids including a series with the original Hobo, David Brunt, called “Be creative with your hands.” Highly entertaining, highly recommended.