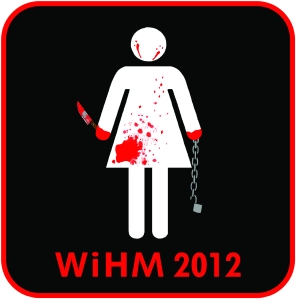 We’ve been having a non-stop party at Dreadful Tales for February’s Women in Horror Month, but now we gotta clean up these beer bottles and sleep off that hangover! Whether you love WiHM, hate it, support it, or don’t give a damn, we featured captivating women with immense talent that refuse to be ignored. I can’t speak for my brothers in blood, but I’m sure they walked away with as long of a to-read list as I did.

While there is no possible way to cover every woman we love in horror literature, we included some of our favorites and pretty damned good ones if I do say so! From veteran, award-winning talent to new genre blood, and behind the scenes folks to artists, we covered an eclectic bunch. Even among the authors we featured, we found they always have more to offer than just poetic, haunting words. Every single woman we featured has a number of projects, interests, and obsessions not limited to literature (or horror for that matter).

I look forward to keeping the spirit of WiHM alive throughout the year as I delve deeper into the catalogue of our featured femmes, but also discover new (to me) talent and I’m excited to share that all with you! (ed – except for Jim because he isn’t supposed to be talking to me for a while. Jim, if you’re reading this, don’t forget to pick up Sins of the Sirens!) I might even post the list of my WiHM haul after I place the massive book order I have sitting in my queue!

Today we look back and every woman we featured this month, so if you missed it completely or just missed a couple posts, you can catch up here.

Jason tackled week one with some new voices in the horror genre as well as one woman who is arguably the most recognizable name we featured all month. First, he introduced us to fresh face Belinda Frisch, author of Dead Spell and short fiction collection Crisis Hospital. As an indie author herself, Frisch is a champion of great indie titles, so if you’re looking for new talent, this is the woman to follow.

Next up, Jason gives a rundown of Jovanka Vuckovic’s projects past, present, and future. From her legendary stint as Rue Morgue Magazine Editor in Chief, her non-fiction zombie book Zombies: An Illustrated Book of the Undead, and a new movie on the way, The Captured Bird, Vuckovic has done it all! Except been the lead singer in a rock band… Wait, has she done that too!?

To close the first week of WiHM, Jason introduced horror photographer Danielle Tunstall. It’s hard to miss Tunstall’s work. It’s striking, freaky, brilliant and beautiful. Not only is Tunstall a master networker, her work is absolutely memorizing. You’ll know it when you see it.

I took over the reigns for the week of 2/6 kicking off the festivities with a feature and interview with one of my favorite authors, Elizabeth Massie. The film adaptation of her short story of the same name, Abed, is coming soon and we have a set visit exclusive to share so stay tuned for that. Inspired by the upcoming premier, Massie has been furiously creating new Skeeryvilletown zombies, so be sure to check out her Facebook page for those.

Massie was followed by fresh face Ania Ahlborn, who, like all the other women featured this month, will definitely be back soon. Ahlborn is working hard to bring us extra creepy fiction, so we’ll be reviewing those here.

I had the chance to chat with another one of my favorite authors, Lisa Mannetti. First came the feature and that was followed by an illuminating interview. Mannetti really went all out, and every question got thorough treatment.

I also got to interview the hilarious, unabashed Jeff Strand fanatic, author, and artist Ash Arceneaux. She’s got many irons in the fire, so expect to see her name again here too. Ash has plenty to say about the “boys club” culture of the writing world and she doesn’t hold back. Great chat all around!

I close out the week with a feature of Creeping Hemlock Press’ co-founder and co-editor Julia Sevin which was followed by an interview later on. Sevin has a great sense of humor and shared a lot of juicy tidbits about upcoming Creeping Hemlock Press / Print Is Dead titles, so check it out!

Colum takes over with the sweetest, most heartwarming entry of the month, a feature and interview with his own lil’ Woman in Horror, his daughter, also known as the horror girl who owns his soul!

Colum’s got some new blood to share after that with author Miranda Doerfler’s feature and interview. He’s been raving about her first publications and she’s always working on something, so you’ll be seeing her around Dreadful Tales again.

Next up is a feature with modern marvel and genre Wonder Woman, editor, agent, Bree Ogden. What was supposed to be a feature and interview was thwarted by ghosts in the computer. As Colum’s computer took its last breath, it took his audio with it. We should see that sometime soon, though in a profile of Underneath the Juniper Tree here at Dreadful Tales, so stay tuned!

Following Bree Ogden is her Underneath the Juniper Tree partner in crime, artist Rebekah Joy Plett. Her art is simply beautiful. A bit of whimsy with a dark undertone, I was awestruck by her creations and I think y’all will be too.

I come back for the week of 2/20 with a relatively new voice to zombie fiction, a feature and interview with author Joan Frances Turner. Tuner will be wrapping up her zombie “Resurgam Trilogy” soon, so we look forward to seeing what other tricks she has up her sleeves after that (some of which she alludes to in her interview).

For the next four days, I covered the Ladies of Sins of the Sirens, a Dark Arts Book release featuring four exceptionally talented voices in horror fiction. We have features, a couple interviews, and mini-reviews of all the stories in the anthology from Loren Rhoads, Maria Alexander, Mehitobel Wilson, and Christa Faust. Just click on the links to find out more about the Ladies of Sins!

Jason, our resident expert on everything indie, kicks off the final week of WiHM with a look at author Thea Isis Gregory’s series Zombie Bedtime Stories. Jason gives a thorough rundown of the series thus far and makes a convincing case for this new blood. Sounds like the kinda fresh meat you can sink your teeth into!

Colum closes out WiHM with two phenomenal closing acts. First up is the reader and reviewer (but she’s also a writer!) we all aspire to be, an interview with Sheri White. She shares some interesting stories and fanboys and girls will flip when they hear what she has signed by whom!

And last but certainly not least is a woman who wears many hats – publisher, editor, web mistress, reviewer – but this post is all about the author and poet Monica S. Kuebler. There is a wealth of information on this young, hardworking talent and even some videos of her readings. Dreadful Tales is immensely pleased to scream the name Monica S. Kuebler to the skies and we hope you all fall in love with her too!

I hope all our Dreadful Tales readers enjoyed Women in Horror Month as much as we did. I also hope we helped open the proverbial Pandora’s box of female literary talent and filled your shelves with great horror reads, whether that be illustrated non-fiction, spooky YA tales, straight horror titles, or poetry.

1 thought on “Dreadful Tales Women in Horror Month Wrap Up!”