Today marks the second feature this week to which I owe credit to Greg Lamberson since he’s the one who introduced me to this seriously talented femme in horror! Julia Sevin, co-editor/co-founder and better half of the husband-wife brainchild Creeping Hemlock Press, is also a writer, graphic designer (some of my favorites being the Slow Burn Burlesque flyers), mommy and on and on.

First things first, I came across Creeping Hemlock Press, and eventually Julia Sevin, because I was hunting down deals for a special Black Friday edition of Bloody Bytes. I just started harassing all my favorite writers to ask, “Hey, got any cool deals for Black Friday?” No one really did, but Lamberson forwarded my query onto the Creeping Hemlock Press folks and a new obsession was born. Of course, Lamberson’s zombie road novella Carnage Road is coming out on Creeping Hemlock’s zombie imprint Print Is Dead in April 2012, so I probably would’ve made the connection eventually. Probably…

I got quite a lovely haul from the super-duper small press, picking up four titles. What initially drew me to them though was the reprint of Lawrence Block’s 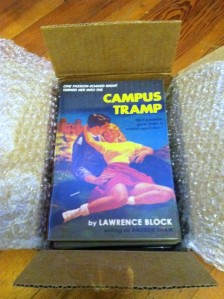 (writing as Andrew Shaw) 1959 “retro sex romp” Campus Tramp. One look at that badass throwback cover and it’s not hard to see why. Each chapter opens with a naughty little photo too.

I didn’t stop there. I also picked up their very first publication under the Creeping Hemlock brand, Corpse Blossoms. If you’re going to get anything from them, you must have the anthology that started it all. This collection includes stories from Tom Piccirilli, Brian Freeman, Scott Nicholson, Bentley Little, Ramsey Campbell, Steve Vernon, and over a dozen other talents, edited by R.J. and Julia Sevin. Corpse Blossoms has received some very high praise from genre lit greats like Jack Ketchum and Brian Keene, and was nominated for a Bram Stoker. Personally, I think being nominated for a Stoker is as much a badge of honor as the actual award. I know as a writer or publisher you want to win, but seriously, to be included among Bram Stoker-nominated talent is impressive.

This venture started simply enough for the Sevin duo:

As sometime writers, oftentime readers, they found themselves frustrated with the scarcity of generous-paying, atmospheric and bizarre short story anthologies. 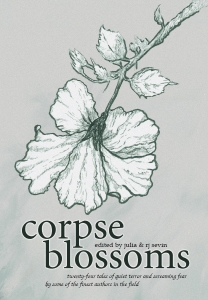 As with most things, making this dream come true was anything but simple. I’m sure there were a lot of blood, sweat, tears, and paper cuts to make Corpse Blossoms happen. Based on Joseph Nassise’s introduction to the anthology, Julia Sevin was an integral part of that. R.J. had approached Horror Writers Association authors to solicit contributions to the collection. When the first attempt was unsuccessful, he went back to the drawing board, came up with a new game plan, this time with the help of Julia. The rest is history.

There are several titles out from Creeping Hemlock Press since the first publication of Corpse Blossoms in 2005. I picked up a couple them, Tom Piccirilli’s The Fever Kill (which has striking retro inspired cover) and Frayed, both of which Dreadful Tales will review… someday!

As I mentioned, Julia is also a writer. You can find her work in the chapbook Thin Them Out, a collaboration with her husband R.J. and Bram Stoker Award-winning author Kim Paffenroth. Unfortunately, I didn’t snag that title, but I will. 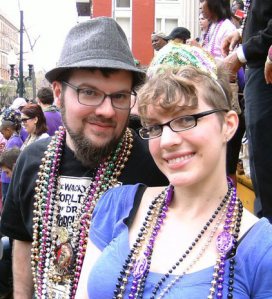 I recently picked the dynamic young lady’s brain to get the deets on everything else she’s into, inspirations, inner working of the press, and being a Woman in Horror. You should see that soon, if I didn’t scare her off! Sorry, folks, but it’s possible I may have harassed her a bit too much. There were a string of socially awkward e-mails (all outgoing) that may have pushed Julia over the edge! Or she’s really busy. Like I said, she is into a bit of everything.

Either way, you have to check out the Creeping Hemlock Press website, buy some goodies, fall in love with solid genre fiction that will make your heart go pitter-patter like it was your first time all over again, and find out what all the cool kids are raving about!

Oh, and don’t forget about the Print Is Dead Facebook page!