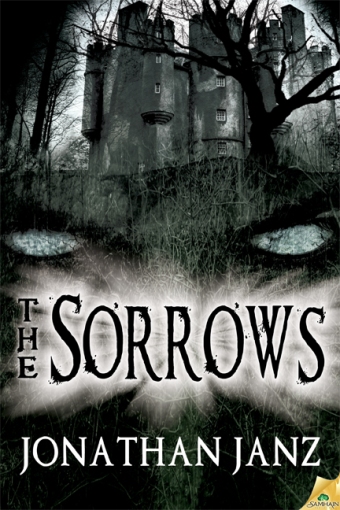 Twenty-twelve is gonna be an excellent year for horror fiction fans. I got that sense compiling the list of Dreadful Tales’ most dreadfully anticipated releases for this year, but also because I opened the year with a novel that really got my blood pumping. Jonathan Janz’ The Sorrows came out in December 2011 from Samhain Publishing, just in time to kick the doors off this mutha, giving every fiber of his creative being to make the reading community take notice. You might be thinking “Jonathan who?” “Janz what?” But I’m going on record to say that by the time this year is over, you shall know thy name Jonathan Janz!

Genre fans quickly made themselves at home with Samhain Publishing, especially with a trusted name like Don D’Auria at the helm of their horror line. While D’Auria brings macabre vets over to our new playground, he’s got some fresh meat for us to feast on as well, namely the aforementioned Jonathan Janz.

Lately, we want for nothing in the genre of speculative fiction – hell, did you see all those titles coming out in 2012!? Janz’ sophomore effort among them. But just when you thought you couldn’t be more enthusiastic about the promising future ahead, Janz shows up to the party with a breath of fresh air. Ok, maybe the air has a bit of a stench… and within it hides a slobbering beast, threatening to violate you in unimaginable ways. Still, for those that crave new blood, it’s here and Samhain has found him.

Something is trapped in the castle, and it wants to feed!

The Sorrows, an island off the coast of northern California, and its castle have been uninhabited since a series of gruesome, unexplained murders in 1925. But its owner needs money, so he allows film composers Ben and Eddie and a couple of their female friends to stay a month in Castle Blackwood. Eddie is certain an eerie and reportedly haunted castle is just the setting Ben needs to find musical inspiration for a horror film.

But what they find is more horrific than any movie. For something is waiting for them in the castle. A being, once worshipped, now imprisoned, has been trapped for nearly a century. And he’s ready to feed.

You remember the first time you read Laymon? Of course you do. ‘Member years later, discovering a child of Laymon, someone a lot like you, someone a lot like him, carving their own niche in the horror genre? That’s Jonathan Janz! He’s no doubt influenced by other subgenres and horror forefathers, not to mention drawing from his own non-literary artistic influences, but the parallels between Janz and Laymon in The Sorrows is evident. He adopts the successful Laymon pace, a popping and crackling burn, with a writing style that reflects his own intimate passions and interests. The plot speeds along, like your father at the wheel on a summer road trip, determined to get from point A to B, refusing to pull over to give his desperate passengers a bathroom break.

The Sorrows has a Gothic influenced setting. A desolate castle on an isolated island off the coast of California gives this story all the makings of a dark atmospheric tale, but that’s where the parallels to the shadowy romanticism characterized by Gothic tales ends. While The Sorrows is often romantic in tone, you’ll hardly have time to coo over the scenery while you hold your lover’s hand because Janz will disrupt any tender moment with horrifying mayhem. Every soft reprieve is destroyed by a shocking assault. And for this reader, there is no better drug. Janz is a little trickster, perhaps not intentionally, in setting up the reader for a ghostly supernatural yarn when The Sorrows is really a vicious, sexy beast of a novel.

Not only can you draw strong parallels to the Dreadful Tales God ‘O Literature, Laymon, the violent eroticism is also reminiscent of Richard Matheson’s Hell House, which surely by no coincidence gets a passing mention. Even in the hands of a skilled writer, name-dropping a horror film can come off forced, like you’re trying to be cool, but Janz cleverly tucks it into just the right place with a wink and a nod to welcome you home. Since our main protagonists are film composers, working in particular on a horror film, Janz takes advantage of the opportunity to make that connection to his readers more than a few times.

Speaking of music composition, that is another very important, driving force of the plot. Janz scores his novel with the haunted notes of an unnatural beast, a supernatural force reciting its song with a humble ardor. He exhibits an intimacy with music in The Sorrows that can’t just be feigning interest. Another author that incorporates his music obsession into his work fluidly and with a piercing impact is John Everson, of course most notably in Siren (which I consider an Everson masterpiece). Based on this first book, Janz will likewise offer his readers the same aural stimulation in his stories.

Peppered throughout The Sorrows are diary entries from one Calvin Shepherd, inhabitant of this damned castle around 1925, who recounts his experiences on the island, which piece by piece reveal the secret of what preys on our four protagonists – Ben, Eddie, Claire, and Eva. Did I forget to mention them!? Janz has a strong past voice, another attribute I deeply love about Everson’s work. This anchors the story with historical context making it more horrific and disturbing, but also giving the author a chance to flex other literary muscles, i.e. introduce Gothic and poetic elements.

For all I reveal about Janz’ literary prowess, there is much more to discover. A terrible monster is waiting to leap out from the darkness, aching to dig its claws into your skin, never letting go, with an undeniable concupiscence that cannot be satisfied. (“Concupiscent” is a beautiful word I learned from reading The Sorrows. Who said reading horror isn’t educational!? Definitely not anyone at Dreadful Tales!)

For all lovers of the macabre and readers looking for a dark, sinister literary treat, gather ‘round, fiends, Jonathan Janz has a story to tell you.

The Sorrows is available in ebook format from Samhain Publishing, but for those who haven’t crossed over to the darkside yet, the paperback version will be available in March. Keep your eyeballs peeled for the release of Janz’ second novel, House of Skin, due out this summer. And don’t forget to stalk his Facebook page, Twitter feed, and website.

5 thoughts on “The Sorrows by Jonathan Janz”