I’ve been reading Stephen King’s It for over a month. Of course, I had to take breaks from reading to get married, buy a house, do a little remodeling, move in, and all the good stuff that comes with being a grown up. But still, after a solid month and a half (maybe even 2 months!) of reading the same book I am getting a little burned out. Don’t get me wrong, King’s It is by no means plodding. The characters are engaging, sympathetic, and carefully developed. The history of the town is deep and complicated. Only a novel of this girth could possibly cover all the ground necessary to make the story really impactful and truly terrifying. And yet, as we near the month of October I find myself getting restless. My pre-ordered copy of Cosmic Forces, Greg Lamberson’s third installment of The Jake Hellman Files (review by Colum here), has arrived. I started Cullen Bunn’s Crooked Hills and there are a number of books coming out in October that I have been looking forward to all year, John Everson’s The Pumpkin Man among them. So, I’m getting a bit distracted. I thought this would be a good opportunity to have an intermission and peruse the covers of It across the globe. Join me beyond the break for my favorite interpretations of Stephen King’s It in the art of the covers!

The image to the right is the edition I’m reading and probably my least favorite of cover of It. This version was published in 1990 by Signet, cover by Lorimar Productions, Inc. I don’t think the various adaptations with the Tim Curry clown is particularly eye-catching either, but this next image brings Curry’s brilliant performance as Pennywise the Dancing Clown in all its horrific glory to the cover of It.

To your left is Book One of the Russian edition. I searched high and low for a bigger image, but could only find this tiny thumbprint on the web. An obvious inspiration of the TV movie adaptation, this cover amps up the creep factor by featuring Pennywise with peeling skin, placing a spooky Sadako (from The Ring) looking ghost girl (long before the long haired Japanese ghost was even popular), and Georgie in the background. Is he smiling!?

Here’s the Russian hardcover edition. This doesn’t quite capture the terror inside this book, but it would be enough to get me to pick it up. 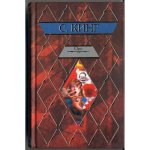 One of the scariest covers in the bunch is the French version, also split into multiple parts. And no, I’m not referring to this horrendous photoshop nightmare which I found this on the Rue Morgue blog in my hunt. Check out the post here.

I’m talking about Book One and Two of the earlier French release that will send chills down your spine. This sinister looking clown is emaciated, and just a pile of bones in Book Two, contorted into horrific shapes wearing a grotesque smile. I think this captures the essence of Pennywise perfectly. You’ll be scared to read It before you even open the book!

The Serbian edition of It tops them all with this stomach-turning depiction of a smiling child, face painted to look like a clown, teeth dripping spittle and blood, and eyes that look youthful yet monstrous. The little slits reveal only black pools which are the window to your worst nightmare!

All the above-mentioned covers of It can be viewed in Stephen King’s shop, but those are my favorites. What’s yours?

This last one is not quite as horrifying perhaps, but a beautifully eerie depiction of the clown in his dwelling. The Cemetery Dance Publications 25th Anniversary Special Edition evokes the spirit of Derry and the haunted places the Losers Club frequented in their youth. If It is your favorite horror novel, this collector’s edition is a MUST!

5 thoughts on “Bit by Bloody Bit: Stephen King’s IT – The Covers”