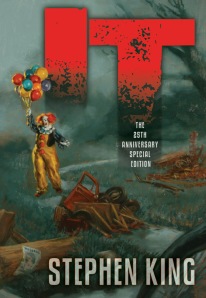 There are some books just too epic to cram all their content into one review. This was evident to me when I started, for the first time in my 30 years as a horror fan, to tackle Stephen King’s 1,090 page masterpiece It. As a child of the 80s and a dedicated horror fan I had seen the film adaptations of Stephen King’s most popular novels hundreds of times, so when I really got a taste for horror fiction I shied away from King’s work. After all, I already knew what was going to happen in almost all of his most popular books, right? How much fun could it be to read something when I already know what is going to happen? Of course, Stephen King fans and avid readers in general know how flawed that logic is. But it wasn’t until just a couple months ago when I sat down to crack open my long neglected copy of It that I finally came to that realization myself.

It is not just long, it is immensely deep. Every corner of Derry, Maine, the novel’s main setting, is explored in such detail it’s hard to believe the town is a fictional place. The complexity of each character and the careful consideration given to their back story, even that of secondary characters, brings a real intimacy to this book. The reader is transported into Derry, Maine to share this horrific epic right alongside Stuttering Bill, Eddie Kaspbrak, Ben “Haystack” Hanscom, Beverly Marsh, Stanley Uris, Mike Hanlon, and Rich “Trashmouth” Tozier, the seven of who make up The Losers Club. Each chapter is its own mini-masterpiece, captivating even in stand-alone form. In the first few chapters of this book I realized I couldn’t tackle the horror classic in one piece. Instead, I thought it would be a fun exercise to examine what many fans consider King’s greatest novel (in a new Dreadful Tales segment) Bit by Bloody Bit. And what better time to celebrate King’s immense tome than now as we edge into September, the month which marks the 25th anniversary of It’s publication. This week our journey begins with Part 1: The Shadow Before.

It opens with the now iconic image of a young six year old George Denbrough, clad in his yellow slicker, chasing a newspaper boat through the rain-swollen streets of Derry, Maine. This simple boat holds significant meaning for George since it was made by his beloved older brother Bill. Georgie, as he is known to Bill, plays Captain of these flooded streets solo this tragic day in 1957 while his brother recovers from a rather serious bout of influenza. While this seems harmless enough, the atmosphere King conveys early on in this novel is deeply chilling and overwhelmingly tragic leaving no doubt that Georgie is in for a gruesome fate.

The opening is preceded by a damaging flood that has rendered many streets impassible and Derry without electricity. This is where King introduces his not so subtle, but delicate prose to describe the horrors elicited by the damaging floods. As an interlude to Georgie’s play, King elaborates on the circumstances leading up to the state of the rain-swollen streets and gives us a glimpse into the human tragedy suffered at the hands of Mother Nature with a little teaser of his macabre sensibility. “The fish had eaten this unfortunate gentleman’s eyes, three of his fingers, his penis, and most of his left foot.” Had King simply stated that fish ate the man’s fingers and toes it would still elicit disgust, but his penis!? That simple statement changes the scene quickly from a sleepy town on a rainy day to an exhausted town beat emotionally by Mother Nature’s wrath. He also takes this opportunity to alert the reader to the secretive, oppressive nature of Derry, a fault which hangs heavily over our tragic characters. He explains that the important task at hand now is cleaning up the mess the flood left behind and to move on because “In Derry such forgetting of tragedy and disaster was almost an art…” King manages to convey an important characteristic of Derry with one concise sentence, an attribute that is evident throughout the novel without being specifically addressed again.

Although the reader meets our titular monster in the opening chapter, from there King abandons the supernatural to address the real life monsters lurking in the world of It, monsters that are just as present today as they were 25 years ago – homophobia, anti-Semitism, domestic violence. It spans from ‘57 to present day ‘85 in Part 1 and while replacing the threat of Commies with Terrorists would make it more current in the flashback sequences, everything else remains timeless.

One of the most striking entries in It that really resonated with me was the back story for Stanley Uris’ wife Patricia. In “Six Phone Calls (1985),” Mike Hanlon contacts the other six Losers to call them back to Derry to honor their pact from years before in late 1950, a pact which King builds up to slowly as he reveals the background for each of them. It is mostly third-person omniscient view throughout, and Patricia shares with us an emotionally scarring incident when she and her date are refused entry to an after-prom party because they are Jewish. Despite her husband’s wealth and Patricia’s new social position, she continues to be haunted by that traumatic day. What is most poignant about the moment are the details she (King) shares to transport the reader into that time and place. “Part of her would always be walking back to the car with Michael Rosenblatt, listening to the crushed gravel under her pumps…” And again, later, when Patricia flashbacks to that horrible experience, “…then she would be somewhere – at the supermarket, maybe – and she would hear sudden tittering laughter from the next aisle and her back would prickle, her nipples would go hard and hurtful… and she would think: Someone just told someone else that I am Jewish.” And her own self-loathing would be enough to trigger “the phantom click and grate of stones,” those that crushed under her feet as they slinked back to her date’s car all those years ago.

I really connected with Patricia in this moment. I am not Jewish, but I understand that intense feeling of self-awareness and self-hatred, the type that comes back to haunt you long after the incident that caused it, an embarrassment and shame deep enough to make your face burn and nipples hard. Most everyone has probably had a moment where they wanted to fold into themselves and disappear from shame, but the physiological detail King includes elevates this scene from something in which the reader can find universal and relatable to truly intimate. I felt like I was Patricia and reading about her experience left me with a heavy heart.

King’s novel remains a timeless classic, one that should not be categorized as “horror” so simplistically, but perhaps psychological drama. Or  more specifically, as King himself puts so aptly in the afterword for his upcoming Cemetery Dance 25th Anniversary Limited Edition, his “final exam on Famous Monsters.” King illustrates an innate understanding of the human psyche in an opening that examines emotional trauma and its residual implications on our lives. I also feel that the intimacies we share with these characters, like that of Patricia, are moments that cannot be duplicated in the film adaptation and they trouble me in ways that the movie never did. How wrong I was to neglect this book for so long, but fortunate to finally discover it!

Cemetery Dance Publications honors Stephen King’s classic It by releasing a massive 25th Anniversary Special Limited Edition as well as Limited Edition Art Portfolio which collects all the art from the Anniversary Edition. Check their website for more details on this must-have for King fans and collectors!

6 thoughts on “Bit by Bloody Bit: Stephen King’s IT – Part 1: The Shadow Before”