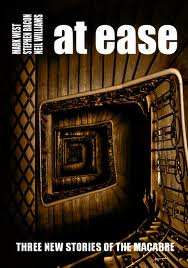 Ill At Ease is one of those books that you really have to get your hands on in order to understand it thoroughly. A combined effort by West, Bacon, and Williams, this is a chapbook that will challenge, entertain, and horrify you with its simple prose and ambitious stories.

See more after the break.

Pete Richards returns to his hometown for the first time in years. His childhood pal is dying, and Pete realizes he must face the past and confront some ugly truths if he is to fulfill his friend’s dying wish. But the events of their childhood would prove to hold far more darkness than he’s ever imagined.

Waiting for Josh, the first story out of the gates, by Stephen Bacon, is a great, creepy, loping sort of tale that eases itself into your mind, and doesn’t let go easily. The main character, Pete, is a tortured soul at the hands of Bacon and his expert choice of description. The most unsettling of the three stories, Waiting… not only takes you on a haunted journey, but it sticks around for long afterwards. Bacon is a very gifted writer with a penchant for crafting spellbinding moments of pure dread.

When David Willis travels to the picturesque village of Hoelzli, for a reunion with his old college friends Simon & Kim roberts, he expects a weekend of laughter and reminiscing. But on a visit to the local fair, he manages to lose the Roberts’ seven-year-old son Billy, and things take a decided turn for the worse.

Where West succeeds with his story – Come See My House In The Pretty Town – is that he takes something innocuous, and makes it into one of the most powerfully realized pieces of short fiction on might come across. Setting the pace from the start, West brings in a flair for understanding the more intimate points of life, and offers up characters that are completely three-dimensional and likable. His understanding of relationship dynamics and the interpersonal challenges found in two ex-lovers is incredible, but he truly shines nearing the end of the tale.

The climax of this one reminds me of something akin to The Wicker Man, in that the main character is lead to believe that some things are normal, when they are in fact very far from it. West’s use of classic horror scares does not go unnoticed, giving up pieces of something special that every reader can find entertaining.

Dave is a loving family man, with a keen eye for a bargain. So when he spots a brand-new-looking child seat at the local top, he decided to take it. After all, he needs one in his car to ferry his daughter around. But then he starts to notice things that seem otherworldly yet still familiar. Could it really be an unique spirit, the echo of some past tragedy? Or is it something else? Something that is much closer to home?

Neil Williams’ Closer Than You Think is the most cinematic of the three stories collected here. The prose within is magnetic, drawing the readers close to the page, and never intending to let go Parents of small children will be absolutely terrified by the way the story unfurls, prompting a new type of paranoia in those of us raising out kids.

Williams really pushes the limit with this one, but does so in a way that makes the reader comfortable, and almost able to guess what will happen next – but not to the detriment of the story itself. The scenes in this story play out like camera angles and stylized shots in the mind, and elicit more than just a little bit of spine-tingling fear from the reader. Anyone checking this one out, who happens to have kids, is going to be sufficiently creeped out.

Ill At Ease could easily pass itself off as the first volume in a series of chapbooks. All of the writers involved brings forth a high caliber writing, and a true understanding of how to scare an audience and, at the very least, how to creep out their audience with seemingly innocent situations gone awry. Each writer has their own voice, their own style, and their own energy, but they all blend so well together as well. One could not ask for a better chapbook anthology exemplifying the very best in the UK horror scene(if you can call 3 stories an anthology…)

2 thoughts on “Ill At Ease by Mark West, Stephen Bacon, and Neil Williams”