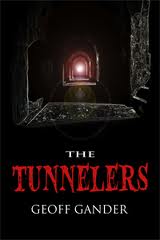 Geoff Gander’s The Tunnelers came across my desk fairly quietly, and blew me out of the water immediately. The power that short pieces can have is staggering, and The Tunnelers is just that – short and powerful.

When a traumatized mining foreman is placed under the psychiatric care of Dr. Vincent Armstrong, the doctor things he has started just another shift. But as the victim begins to remember what drove him temporarily insane, Armstrong’s interest becomes personal, and he makes a series of discoveries that threaten to tear apart his carefully constructed scientific view of the world, and show in horrifying clarity that his patient is anything but delusional.

As Armstrong’s world falls apart, his recovering patient learns that he has not escaped the horrors he encountered, and that no place on earth is truly safe from the “Tunnelers”.

Sounds kinda spooky, doesn’t it? That’s because it genuinely is. Gander writes the character of the miner so well, that it’s nearly impossible not to feel for him. He’s absolutely terrified, and his description of the hideous beasts that have threatened his very existence goes far to prove that he has reason to be so.

Written in the form of a case study of sorts, The Tunnelers grabs a hole of the reader early on. This is a Hitchcockian sort of piece, relying heavily on atmosphere, creeping terror, and the reader’s ability to suspend their disbelief for a length of time spanning just short of 50 pages. Yes, it’s that short. The story’s brevity is where most of it’s power lays. When Gander sets out to scare, he has the ability to just drop and go, never leaving any thread of the story left behind. His expert handling of descriptive nuance is fantastic, and will have the reader chugging along while he sets up chill, after chill, after chill.

The creatures in this book reminded me of Laymon’s beasts in The Beast House Chronicles, save for a few differences. I won’t go into detail, but I was very pleasantly surprised by Gander’s take on subterranean dwellers, and, being the huge Laymon fan that I am, felt that the Tunnelers were a great addition to my own mental warehouse of literary monsters. They’re mean, they’re nasty, they’re our very own history come back to bite us in the ass. I loved ’em.

There’s really not much more to say about this short little novel. It’s a wicked read that is very well written, well staged, and superbly crafted. Every subtle hint that might make you guess the outcome is there, but takes nothing from the excitement, awe, and satisfaction of reaching the end. Gander has written a great little story that will go down as one of my favorite reads of 2011.

Check Gander out at his website, and go grab The Tunnelers at Amazon. It’s a quick read, and I’m sure you’ll dig it. (Pun intended.)

2 thoughts on “The Tunnelers by Geoff Gander”