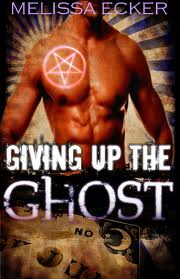 I don’t care what you’re thinking – Paranormal Romance has a place in the horror genre, and Melissa Ecker is here to prove that fact. Not only that, but she’s going to make you cry, laugh, scare the hell out of you, and hit you hard on every other emotion you could possibly think of. Sure, she titillates and teases, but I can assure you that this woman is here to show you a good time, as well as show you who’s boss. Giving Up The Ghost has made me an instant fan of this Ecker’s work, and will go down as my favorite piece of Paranormal Romance/Erotica ever.

Kylie McAllister has it all until her world is shattered by the death of her husband, Jackson, in a car accident. After a year of grieving, Kylie uses the proceeds from Jackson’s life insurance to purchase a plantation home on the outskirts of New Orleans to start over with her daughter, Abby. Confirmed bachelor, Ryan Lacroix, has to intentions of settling down with anyone, let alone his best friend’s widow, but somehow Kylie and Abby find their way into his heart.

After discovering an old Ouija Board in the attic of her new home, Kylie unwittingly opens a cosmic door to an incubus who pretends to be the dead husband she is so desperately struggling to let go of. She falls deep under his spell of delicious sex and malevolent obsession while he gradually drains her life to fortify his own. By the time she realizes he’s an impostor, she is powerless to stop him. Together, with Jackson’s subliminal guidance and the help of a voodoo practitioner, Ryan and Kylie wage a fight for her life against the evil entity.

Picture this: I’m looking at this book, wondering if I should buy it. I think “Hell, what could it hurt?”, buy it, and let it sit there for a couple of weeks. If I had known right then and there that I would be getting a story that mixes the sexiness of paranormal romance and erotica with the absolute, spine-tingling terror that one can find in a novel such as The Amityville Horror (which is still one of the scariest damn books I’ve ever read), I would have picked this bad boy up and read it right then and there. Giving Up The Ghost took all of the trappings that I assumed the P/R genre was about, turned them on their head, and served up a dish that would confuse my emotions so perfectly that I became a slave to them.

Ecker writes beautifully. She follows the formula perfectly, but has such a dynamic flair to her style that she stands apart from others instantly. Her words seethe with unbridled, raw sexuality, but also hold the ability to tear everything down in one fell swoop. The first 4 chapters of this book are designed in such a way that Ecker brings the reader soaring to untold heights of happiness, only to have their wings clipped mid-flight, sending them rocketing down to the pits of despair along with the main character, Kylie. Through incredibly emotional, well chosen phrases and pacing, Ecker is able to craft a very effective introduction to the central theme, and thus starts what quickly becomes a very addictive journey.

Wherever Ecker wants to take her reader, she will. Her prose is tight, her characters believable and light, and her scares are one-hundred percent there. I wouldn’t want to read anything less than that, and Ecker has delivered beautifully. Giving Up The Ghost is a truly terrifying, sexy little read that will leave you gasping for more, but still terrified of playing with the Occult.

Ecker can be found at her website and on Twitter. You can grab her novels at Turquoise Morning Press, Amazon and other retailers online.

1 thought on “Giving Up The Ghost by Melissa Ecker”