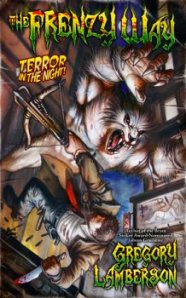 Greg Lamberson is back with The Frenzy Way, another brutal thrill ride into the supernatural. This time, Lamerson is flipping the script on werewolves and upping the ante while he’s at it. You won’t walk away from this one unscathed.

The live among us in the shadows: a species unknown to man except in legend. Highly intelligent, with the ability to adapt their flesh to new forms, they are capable of great destruction and ruthless behavior, but desire only to live in peace. In New York City, a rogue member of their underground society threatens to reveal their existence to mankind, which will provoke a terrifying war unlike any seen before.

Anthony Mace, the heroic captain of an NYPD homicide unit, is a media darling because of his successful record in apprehending serial killers. But Mace faces the case of his career – a case no one else wants to touch – when a series of vicious and bloody murders sends the city reeling in panic. His only clue is a historic artifact discovered at one of the crime scenes: the hilt of a sword with a broken silver blade, bearing the likeness of a pious inquisitor… and an angry wolf.

Each horrifying murder leads Mace closer to an impossible truth that his superiors refuse to consider. In the midst of a national media firestorm, Mace must risk his career – and his very life – to stop this supernatural horror.

As with Personal Demons, Lamberson yet again proves his ability to enthrall the reader with his imagination and words. The story is incredibly complex, but goes down easy when coupled with Lambeson’s trademark style. His storytelling ability is such that he can weave the most compelling characters that you actually care about. He then turns up the heat, eschewing every single expectation you can possibly have as to how things are going to end up.

That being said, one of the things that I love about Lamberson’s writing is the fact that you never really know what’s going to happen to any given character. You can bet that if you fall in love with someone in a Lamberson novel – something bad is probably going to happen to them. Lamberson makes it very apparent that he’s in charge of the story, and that it doesn’t merely evolve into something formulaic. Instead, the writer turns every convention on it’s head and gives you something breathtakingly fresh and new.
It’s also very apparent that this is a man who writes for the screen. Every single move in this book is filled with so much description, and the action is incredibly cinematic. You can’t help but really see everything in your mind – very, very clearly. Hell, I wish someone would option this for a film. With Lamberson’s powerful talent, I’m sure this would make for a wild cinematic experience.Lamberson is ushering a whole new breed of werewolf tales, and I’m stoked to be here while it happens. And you should be too.

Also, keep your eyes open for Lamberson’s follow up – The Frenzy War – coming from Medallion Press in 2012

4 thoughts on “The Frenzy Way by Gregory Lamberson”